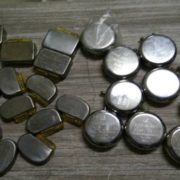 According to information received by SNRIU, 26 radioisotope-powered electric cardiac pacemakers (RECP) with PU-238 that emitted alpha-, neutronic- and gamma-radiation were detected in early December 2017 at the Amosov National Institute of Cardiovascular Surgery during administrative inspection of ancillary rooms. The equivalent dose rate (EDR) at a distance of 0.1 m from product surface was up to 23 µSv/h. Since EDR exceeded the reference levels approved by the Chief State Medical Doctor of Kyiv and agreed by the Chief State Medical Doctor of Ukraine, these products should be withdrawn from trafficking. According to Decree of the Cabinet of Ministers of Ukraine No. 813 of 2 June 2003 “On Approval of the Procedure for Interaction of Executive Authorities with Legal Entities Acting in the Sphere of Nuclear Energy in Detecting Radioactive Sources in Illicit Trafficking”, it was decided after a dosimetry survey to send these products for temporary storage to the waste disposal site of the Kyiv State Interregional Specialized Enterprise, Radon Corporation.