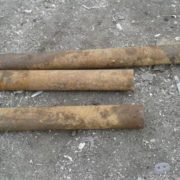 In the fourth quarter of 2017, SNRIU and relevant structures of the central executive authorities of Ukraine responsible for detection of and response to illicit trafficking of radioactive materials continued their activities to reveal and withdraw hazardous radioactive materials beyond regulatory control.

Thus, a radiation source such as permanent-action luminous material containing Radium-226 salts was revealed and withdrawn on a private territory in one of the districts of Zhytomyr oblast. The equivalent dose rate (EDR) on the surface was up to 250 μSv/h.

The cases of withdrawal of radiation-contaminated scrap metal transported to the metallurgical plants of Ukraine are continuing. Thus, on 26 December 2017, fragments of metal pipes contaminated by technologically enhanced naturally occurring radionuclides were withdrawn at the Azovstal Iron and Steel Works.

Citizens of Ukraine continue to send abroad by Ukrposhta post offices various items such as watches, altimeters and other items containing radium-226 salts, the exposure dose rate of which significantly exceeds the established standards. Such items are withdrawn and transferred for further safe storage to Radon specialized plants. Similar souvenirs with an excess of Radium-226 were withdrawn also at the Boryspil airport in the fourth quarter of 2017.

Disregarding the rules of personal safety, some citizens of Ukraine transport radioactive contaminated items in their vehicles. Such a case of withdrawal of a synthetic cable was registered end of December 2017 at Slavutych international vehicle checkpoint.

All the withdrawn hazardous items were sent for further safe storage to Radon specialized plants.