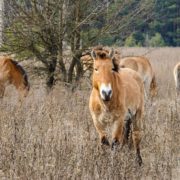 Two key contracts for the development of a project on territory planning and land arrangement for the Chornobyl Radiation and Environmental Biosphere Reserve were launched in 2017 within the UNEP/GEF international project “Preserving, Enhancing and Managing Carbon Stocks and Biodiversity in the Chornobyl Exclusion Zone”.

“The reserve will occupy two-thirds of the exclusion zone, the rest of the territory is the 10-kilometer zone where the industrial site of the Chornobyl nuclear power plant, Vektor site, Buryakivka and Chornobyl NPP Stage 3 radioactive waste disposal sites and other production facilities are located”, Vitalii Petruk, Head of SAEZ, said. According to Taras Melnychuk, Acting Director of the Chornobyl Radiation and Environmental Biosphere Reserve, at the end of 2018, it is planned to complete the land arrangement project being developed to functionally arrange the territory, site, size of land, use and protection of the territory, and determine its boundaries.

In late 2019, it is planned to complete the territory arrangement project developed to determine and justify the measures envisaged for five years aimed at protection, reproduction and use of natural systems and facilities, as well as definition and justification of the development strategy of the nature reserve for ten years. Zoning of territories will be also carried out in accordance with the requirements of the Law of Ukraine “On the Natural Reserve Fund of Ukraine”.

In addition, it is planned to develop a project for integrated forest fire protection system and the decision support system for prevention, early response and radioactive fire-extinguishing in the exclusion zone, as well as assessment of radionuclide distribution and impact of industrial facilities in the exclusion zone.

Construction of Nuclear Fuel Storage Facility: Winter Is Not Hindrance
Scroll to top