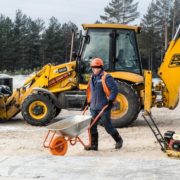 Two months have passed since the construction of the centralized spent fuel storage facility was started in the Chornobyl exclusion zone. As its designers assure, the storage facility is the most updated and safest in the world. What is happening on the construction site, what work has already been completed? We decided to see it with our own eyes.

… We entered the exclusion zone when temperature was there 12 C° below zero. Despite this, the construction site was hot and quite noisy. The earth trembled underfoot. They explained to us: an active work phase is underway with the use of heavy equipment. – Work is currently underway on vertical layout of the site to design elevation +138.8, with stratified soil compaction, Mykola Yemanov, Director General of the General Contractor of Ukrbudmontazh Construction Work explained. – This is a large scope of work. It is necessary to move about 138,000 cubic meters of soil. The equipment removes it in the northern part of the construction site and moves it to the south part in accordance with the design working drawings.

– What is the objective of these operations? – We asked Director General

– This work is related to the need to level the terrain (the site for construction), – he says. – After mandatory cleaning and removal of the conventionally contaminated fertile soil layer, in some areas, the height difference reached 2.9 meters, and we should level the construction site and reach the total level of 138.8 m. We plan to finish this work in March.

– And the feeling that the earth is trembling underfoot, why does it appear? Or was it just a feeling?

– No, it was not just a feeling. The earth is trembling because heavy compressing equipment works, and simultaneously with other work, it compacts soil layer by layer. The qualitative performance of this work is controlled by the Customer’s Technical Oversight Service and a special laboratory that performs soil sampling to analyze its compliance with the required compaction. – Do frost and snow interfere with work? – We asked and received an unexpected answer:

– We will be glad if such subzero temperature would last the whole winter! Late last year, we already experienced snowfall and overcame it, as you can see.

It turns out on the contrary that subzero temperature has advantages because the construction site is a continuous mixture of sand and clay. When it is warm, heavy equipment sticks in such soil and works slower. At subzero temperatures, soil compaction is more intensive and therefore more qualitative.

In addition, we proved that cleaning up the territory from contaminated soil layer makes sense. Radiation level at the construction site varies currently from 0.11 to 0.13 μSv-h (the sanitary standard is 0.30 μSv-h, while in Kyiv the average daily values vary from 0.09 to 0.22 μSv-h). Thus, frost only helps the technological process. Nevertheless, what about people?

– Are you freezing? It is so cold … I am trying to start a conversation with a man who passed by.

– It is cold for someone who stands idly by. However, we work – we are not cold! – He answered with a joking tone.

The joker was Vitalii Bay, master of the construction site. Having talked with him, I understood to a certain extent why he did not freeze. Parents of Mr. Vitalii are from Ukraine, but he was born in the city of Tolyatti (Russian Federation) (his father was a military man and in due time he traveled a lot around the USSR), thus, 12 degrees C below zero will not scare him. Now he lives with his family in his father’s hometown Chernihiv. He has been working for more than 30 years as constructor, three years of them he works and directly in the exclusion zone. I asked what motivated him to get a job in the exclusion zone.

– “There was a time when I became very curious about what was happening in the area that suffered such a catastrophic influence”, Vitalii said.  “I read a lot of scientific articles on this topic, I watched documentary films. Later an opportunity turned up, they invited me to work here. I agreed and still do not regret it. Therefore, this work has peculiar nuances: 15 days I am on watch, and 15 days at home with my family. Of course, both my wife and children feel sad when I am not home. It was difficult and unusual at first, but my relatives are sympathetic to this, they are waiting for me. Children know that dad works hard to make money for the family and appreciate it. Moreover, the wages are much higher here in comparison with Chernihiv. Therefore, as you can see, any work has advantages and drawbacks.

– And the radiation does not scare? After all, local residents (Ivankiv and Polissia districts) have been tuned for years against the exclusion zone and everything related to new construction in the zone…

– I am not afraid of radiation. Probably you know that all employees in the exclusion zone must have medical examination. During those three years that I worked in the zone, it did not affect my health at all. However, probably people are afraid, because the fear of what happened in 1986 is still alive. In my opinion, the lack of truthful information or the reluctance to take it is evident.

About 45 people work now on the construction site. In the future, over 250 people will be involved in the work. They work usually on a shift basis – 15 days at work and 15 days at home. Now work is under way on the arrangement of a temporary camp for construction and installation subcontractors: UTEM-Engineering, UkrEnerhomontazh, and Ukrtransbud.

The contract is extensive and the amount of work is also considerable, but the time for its implementation is limited. According to the calendar plan, in 2018 they should complete laying of all internal networks and communications, the so-called “zero cycle” including construction pits, CSFSF buildings and structures, and move to “above zero” construction, that is laying networks, providing physical protection of the territory, construction of oil collectors, internal network, construction of the site for storage of containers and refueling unit … Completion of activities at “zero cycle” is planned in early 2018, and “above zero” construction will start in the second half of this year.

This demonstrates that there is no schedule delay. The foundations for temporary storage facilities have already been filled: cold (for metal parts and structures) and warm (for equipment and devices). The temporary fencing of the facility is under mounting, the site for concrete plant, which will serve for construction, is under equipment.

The foundations for two temporary checkpoints and a unitized transformer substation are ready to provide temporary power supply. Wet pits for domestic sewerage were equipped. Temporary economic drinking and technical water lines are laid. It was started with the construction of a drainage ditch; temporary access roads are being arranged.

However, Ukrainian realities make themselves felt: bureaucratic runaround affected even the strategic construction. I drew attention, for example, to the fact that the construction site does not have enough lighting to work in the dark. I asked, what is the reason? Director General of Ukrbudmontazh threw out his hands – despite the fact that the foundation for the complete transformer substation is ready and the project and lighting masts are available, the project provides for facility connection to the network, but Kyivoblenerho did not approve it yet.

– Unfortunately, promotion of bureaucratic machine takes a long time, – Mykola Yemanov explains. – Even though this facility is of strategic importance for the country, and despite clearly defined deadlines, Ukrainian officials remain very unenthusiastic. Sometimes I even think that Kyivoblenerho officials are waiting that the President of the Energoatom Company will come to them personally and ask for help for project agreement… Of course, we provided workers with heat and electricity now in winter under sub-zero temperatures. We installed diesel generators and people have warmth and light, but this problem should be solved.

– My team involves 10 people. The work is performed according to the schedule: over 1800 meters of railway of 5800 meters envisaged in project have already been laid, – explained Viktor Poychuk, contractor representative and site specialist, who met us. He said that railway to CSFSF is constructed by the contractor UkrEnerhoMontazh, which concluded a direct contract with the Energoatom Company.

– – According to my information, – Poychuk says – the work should be completed in April 2018. However, an insignificant natural barrier appeared on the way of laying the railroad tracks, and it is quite possible that implementation deadlines will be postponed.

– What are the features of this barrier?

– Wetland area. All fine and dandy, but the territory was flooded due to large amount of precipitation in November-December last year. The water level at the area increased to about 1.7 meters. The Customer makes now a technical decision on what to do with this.

Little by little, we got into conversation. Thus, it turned out that Viktor Poychuk was born in Khmelnitsky region. I could not refrain from asking how fate led him into the exclusion zone.

– Friends offered work, I agreed, – he replied. – I am not afraid of radiation because I live in the observation area of Khmelnitsky NPP.

When communicating and walking to the territory of the construction camp, vigilant guards – winter-fed dogs Naida and Knysh met us. A month ago there were three dogs, Victor said, but wolves have eaten one of them. This year, he noted, wolves are too active, they steal dogs throughout the exclusion zone. Moreover, in autumn their team met a bear twice – once a slobber crossed the path when they went to the watch in the morning, and another bear was already in a new area.

Here is the confirmation of the words of our attendant: having stopped to take a photograph 5 km away from the construction camp, we saw fresh wolf tracks on the snow. After that, we decided not to move away from each other.

In the end, we were convinced: the construction of the centralized spent fuel storage facility steps up. We promise that we will further keep our finger on the pulse.