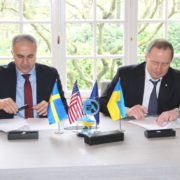 While commenting the agreement, Yurii Nedashkovskyi, President of SE NNEGC Energoatom, reminded that Energoatom was the only operating utility of VVER -1000 type reactors in the world that had fully diversified sources of nuclear fuel supply for that type of reactors. Mr. Nedashkovskyi emphasized, “Cooperation with Westinghouse was integral to achievement of this goal”.

The nuclear fuel from Westinghouse has over the years come to play an important role in Ukraine’s work for independence. Westinghouse has been a fuel supplier to Ukraine since year 2005, when the first lead test assemblies was delivered to NPP South Ukraine unit 3. “This contract extension solidifies Westinghouse’s role as a strategic partner for Energoatom and demonstrates our ability to support Ukraine with their energy diversification. The fact that we, under the terms of the contract, will source some of the fuel components from a component manufacturer in Ukraine further strengthen the relationship between Westinghouse and Ukraine,” said José Emeterio Gutiérrez, Westinghouse president and chief executive officer.

“We are pleased that Energoatom is continuing to trust Westinghouse as an reliable supplier of nuclear fuel to VVER reactors,” said Aziz Dag, Westinghouse vice president and managing director, Northern Europe. The fuel to be supplied will consist of components both from Westinghouse Fuel Manufacturing in Columbia, SC, in the United States and from a component manufacturer in Ukraine.  The manufacturing and assembly will be made by the Westinghouse fuel fabrication facility in Västerås, Sweden, where parts of the production lines are solely dedicated to VVER 1000 fuel. Deliveries against the contract will begin in the beginning of 2021, immediately following the conclusion of existing contract.

Familiarization with CyberKnife Radiosurgery System for Treatment of Cancer...
Scroll to top