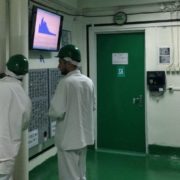 The system for the visualization of data on radiation protection was put into operation at SUNPP at the end of January 2018. Three large monitors located in the controlled area of the nuclear power plant demonstrate multimedia files on radiation protection. The new visualization system was implemented within the fulfilment of recommendations of WANO mission on the strengthening of activities on the non-spreading of radioactive contamination.

“The visualization of radiation protection data is wide spread in developed nuclear countries. It was first applied in Ukraine. I was acquainted with this practice during the technical assistance mission at Kozloduy Nuclear Power Plant in Bulgaria. Its implementation in Ukraine will allow us to increase the production culture and radiation safety culture. We also hope to reduce the exposure doses for personnel during scheduled outage of power units”, commented Volodymyr Boiarishchev, head of SUNPP Radiation Safety Shop.

The monitors of the new visualization system were installed next to the central radiation control room at unit 3, radiation control room and room for receiving dosimeters of NPP Stage I (includes units 1 and 2). Their placement was not random. These are the places, where the maximum number of personnel can get acquainted with the multimedia materials.

“Through visualization, we seek to demonstrate and help people to understand what consequences can be caused by incompliance with rules. A permanent demonstration of the multimedia files is intended to make people comply with rules on a subconscious level”, Volodymyr Boiarishchev stressed.

Currently, the monitors of the visualization system show presentations developed for each meeting of ALARA Council. Such an approach allows people working in NPP controlled area to familiarize with information considered by the Council. The monitors also regularly demonstrate films on the non-spreading of radiation contamination, rules for passing through changing rooms. The plans for the preparation of new educational demonstration materials are under development.

ALARA is one of the main criteria of radiological protection. The main ALARA principle is to reduce the dose loads on personnel to the lowest possible level taking into account economic and social factors. ALARA principle was implemented at SUNPP in 2001. Organizational and technical measures on the reducing of dose loads on personnel have been implemented since the approval of the ALARA Program. The progress is monitored at the meetings of ALARA Council held each three months.