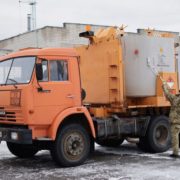 Transportation and handover for disposal of RAW packages produced at the Liquid Radioactive Waste Treatment Plant (LRTP) into the Engineered Near-Surface Solid RAW Disposal Facility (ENSDF) commenced on January 31. The first batch in this year – four packages of RAW – was transported to the disposal facility. The further handover of RAW packages to the ENSDF is to be implemented according to the schedule approved between the Chernobyl NPP and State Specialized Enterprise “Central Enterprise for Management of Radioactive Waste” (SSE “CEMRW”) to which the ENSDF belongs. The available RAW packages are transported to make room for the end product storage at the beginning of LRTP operation. As noted by the Deputy Technical Director (for RAW Management) Oleksandr Skomarokhov, at the beginning of 2018 the Chernobyl NPP has approached the final stage of LRTP commissioning: “A separate permit for the LRTP operation was given to the enterprise in December 2014. Before that all required tests of the LRTP had been carried out. These tests resulted in production of 63 packages with RAW. Four packages were transported to the ENSDF in 2014 to fulfil the whole processing chain of RAW management. Other packages were stored at the LRTP within the end product curing premise in accordance with the permissions of the State Nuclear Regulatory Inspectorate of Ukraine (SNRIU)”.

Pursuant to the SNRIU’s separate permit given for the LRTP operation, a start condition for the Plant operation should be obtaining of the Certificate from the State Architectural and Construction Inspectorate of Ukraine (SACI) confirming completion of the facility construction. Mr. Skomarokhov explained: “Obtaining of the Certificate was delayed due to the enforcement of new construction standards and rules. Based on the corrective design which took into account the new construction requirements, the required measures were implemented at the LRTP. These measures covered fire safety improvement, protection against lightning, heat insulation, installation of independent electric boilers and steam generator that will enable to evaporate radioactive wastes and eventually reduce their amount owing to the increase of salt content in them.” All key activities, specified in the corrective design, were completed at the end of 2017. Obtaining of the SACI’s Certificate is planned for February 2018. Mastering the LRTP design capacity (i.e. 7 packages with RAW per day) is planned during the first half of this year.

Membrane installation to seal the NSC Arch
Scroll to top