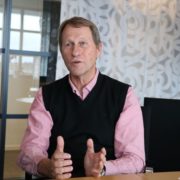 The issues related to safe operation of nuclear power plants (NPP) have always been and will remain relevant for Ukraine. There are 15 operating power units, producing over 50% of electricity in the country.

Ukraine ranks the ninth in the world and the fourth in Europe according to the number of nuclear reactors. In this regard, great attention is paid to nuclear and radiation safety in the state. Experts in this field highly evaluate the experience of European countries, learn new technologies and introduce respective regulations.

Uatom.org editorial board succeeded to communicate with Tage Eriksson, leading expert of the Swedish Radiation Safety Authority (SSM), on how Sweden manages to regulate nuclear energy safety, what problems NPP operators face and how they overcome them. In addition, especially for the Uatom.org website, the interview presents the experience in decommissioning of Swedish NPPs, thermal power uprates and purchase of nuclear fuel from four suppliers. – Tage, how long have you been working for the Swedish Radiation Safety Authority?

– What nuclear facilities are currently operated in Sweden?

Ringhals and Oskarshamn NPPs were constructed a little later and Barsebäck and Forsmark NPPs after them.

Barsebäck NPP unit 1 was closed in 1999 and unit 2 in 2005. Decommissioning of these has just started.

Two power units were closed year 2017, Oskarshamn NPP units 1 and 2. Unit 2 was closed prematurely: it was under upgrading, but this was too expensive and it was decided to close the power unit exclusively for economic reasons.

– What types of reactors are operated at NPP?

Oskarshamn NPP unit 3 and all three power units at Forsmark NPP are BWRs.

– What challenges are most often faced by the Swedish nuclear power plants? How do you solve them?

– The most common challenges are equipment aging and wear. In the second case, when equipment replacement is not technically feasible, this is a very serious challenge.

As regards equipment ageing, I can provide an example of rather serious problems that occurred at one of the Ringhals NPP units where the containment lost its tightness due to corrosion in the metal lining. As a result, the operator had to replace not only the lining but also the concrete covering the metal lining.

– Does Sweden have experience in NPP long-term operation?

– Do you have experience in decommissioning?

– In this case, I should start with research reactors.

In the late 1940s and in the early 1950s, Sweden began to think whether to develop nuclear industry and start thorough research in the field. As a result, a positive decision was made, after which the construction of several research nuclear reactors was started.

The first nuclear reactor was commissioned at the Royal Institute of Technology. Today, the reactor has been completely decommissioned.

Then the Studsvik research site was constructed and many research reactors were placed on it. Some of the reactors have been decommissioned, and the largest reactor R-2 is under decommissioning.

As I already mentioned, Barsebäck NPP units 1 and 2 were closed in 1999 and 2005, respectively. Today, the nuclear power plant has received an authorization for decommissioning. A part of the internal structures has been already dismantled. – What funding source is used for NPP decommissioning?

– According to Swedish legislation, the plant operator should pay fee to the Nuclear Waste Fund in proportion to the electric energy delivered.

SSM is authorized to monitor the allocation of costs to the Fund, determine the fee amount and supervise storage of costs.

– Does Sweden have experience in NPP operation in daily load-following mode?

– We have no experience of operation in daily load-following mode.

– You probably have an appropriate authority to coordinate this process?

– Discussions are now underway in Ukraine regarding possible power uprates of national NPPs. Is this practice used in Sweden? Is it justified in terms of safety?

– The practice of power uprate has been implemented at most Swedish power units. The power uprates ranges from about 10%, up to about 30% (e.g. Oskarshamn NPP unit 3) compared to original design.

If the operator wants to implement a power uprate, it basically has to submit an application to the regulator (SSM) and the Land and Environmental Court with safety case and detailed arguments and amend the safety analysis report and the environmental impact analysis. If the regulator and the Land and Environmental Court have no comments, the operator obtains an authorization for power uprate. However, in practice the procedure of authorization is conducted in several steps.

Swedish nuclear power plants have already implemented some measures to improve safety in accordance with the ENSREG technical specifications, but there are also those that require further implementation.

Safety improvement measures will not be taken in full scope at Ringhals NPP units 1 and 2, which are to be closed in 2019 and 2020.

– What is the funding source for post-Fukushima measures?

– The operator includes the costs into the tariff.

– Do you have a special commission to set the tariff for electricity?

– No, we do not. Sweden has a deregulated electric energy market.

If the buyer is not satisfied with the price for electricity, it can easily replace one supplier by another.

– How long the free energy market has been functioning in Sweden?

– About 15-20 years. We have a common electric energy market with Nordic countries. We have a unified electric power supply system (i.e. a common AC super grid) with Norway, Finland and part of Denmark. – No research reactors are operated in Sweden at present. However, it does not mean that we do not conduct any research in this area.

The research of nuclear material continues at dedicated universities of Sweden and at the Royal Institute of Technology. As far as I know, Studsvik Nuclear AB had recently a joint research project with Ukraine.

– How many nuclear fuel suppliers are there in Sweden?

– Do you have any challenges with TVEL fuel?

– Prior to operation, the NPP operator properly tested several assemblies. Some minor drawbacks were revealed e.g. some tightening bolts were loosened because of vibration. Nevertheless, the problem was solved. To date, SSM considers TVEL fuel quite suitable for Swedish NPP units, as well as the fuel fabricated by the other manufacturers.

– Tell us about Westinghouse, nuclear fuel fabrication plant. Is it convenient to have such a facility on the territory of Sweden?

– The Westinghouse Nuclear Fuel plant in Sweden is a part of Westinghouse Electric Corporation (now owned by Toshiba). As the regulator, we have no reasons not to trust them.

As for location of the plant on the territory of Sweden, this is not important for the nuclear regulator. The regulators job is to monitor the reliability and quality of fuel so that it meets all safety requirements.

– Does Sweden have the full cycle for fabrication of fuel assemblies?

– No, Sweden does not mine or enrich uranium. The fuel producer is chosen by the operator. If the operator requires nuclear fuel, it should ask the Westinghouse plant to fabricate it and buy enriched uranium in advance from different countries e.g. Canada or Russia.

– Do you think that Ukraine should build its own fuel fabrication plant? Would Sweden buy assemblies fabricated in Ukraine?

– I can answer this question only as a private person, but not as an SSM representative.

I think that Swedish NPP operators will continue to consider the purchase of fuel assemblies from different suppliers. However, not only the price, but also the quality and support services will be analyzed very carefully, including computer codes to justify the safety of fuel implementation. If the Swedish NPP operator is satisfied with all these factors, Ukraine will surely have a chance.

Management of Radioactive Materials in Sweden: Interview with Expert

What Does George Kuzmycz Center in Ukraine Do?
Scroll to top