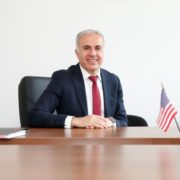 – In January, there was news that Brookfield Business Partners Investment Company is going to buy Westinghouse Company. What does this mean for Westinghouse and how will it affect the Company’s operations in Europe, including Ukraine?

– This purchase announcement is a good step for the future of Westinghouse. Brookfield Business Partners are ready to buy the entire Westinghouse business, including operations in Europe. The signing of the agreement is expected in the third quarter of 2018.

We still expect completion of required regulatory confirmations of such a deal. This deal will make Westinghouse stronger globally and more stable in the long run.

– As you know, President of Ukraine Petro Poroshenko stated that the share of Westinghouse fuel will be increased to 55% in order to reduce dependence on Russia. However, it is necessary to supply fuel for eight Ukrainian power units (out of 15 power units in Ukraine) to reach this goal. According to the signed agreement, fuel will be supplied only to seven units. What is the reason for this?

– The recently signed agreement is an extended version of the previous contract with Energoatom according to which we will supply fuel not to six power units, but to seven. This is a great sign that Westinghouse fuel is good in use and it is valued on the market. In addition, the contract itself provides for the possibility that Westinghouse will supply fuel to more power units. We are ready to do it.

– So why only seven units?

– It was important for us to extend the contract and we managed to get it. We agreed on the basic minimum number of power units. Additional purchases of fuel are also possible, if Ukraine wants it.

– Which power unit became the seventh one to get nuclear fuel?

– This will be Rivne NPP unit 3. This power plant will be new for Westinghouse and we will supply fuel to it for the first time.

– Is it possible to amend the current contract between Energoatom and Westinghouse?

– Yes, since the contract indicates the minimum number of power units. We always have the opportunity to change it and arrange additional supplies.

– Did the contract preserve the issue on force majeure according to which, if Russia suddenly stops fuel supplies to Ukraine, Westinghouse will be able to supply fuel to all power units at the same time?

– We do have this issue on force majeure in the contract. However, this opportunity will take time. It is necessary to inform in advance. We will need time to prepare for this.

– How much time do you need?

– Westinghouse will need 12 months to prepare for fuel supply to all power units. If Westinghouse supplies fuel to more than seven reactors, the preparation time will be reduced.

– How much fresh fuel did Ukraine buy from Westinghouse to store it in storage facilities meaning to use it later?

– From Westinghouse’s point of view, we supply fuel to Ukraine so that it is immediately used at NPPs. Westinghouse knows that Energoatom stores some part in storage facilities. Currently, all Westinghouse fuel is in use.

– When does the Company plan to get a license from the SNRIU for nuclear fuel operation at the seventh power unit?

– At the moment, we are working with the regulator. In the meantime, we will be ready to supply nuclear fuel to Rivne NPP in 2021.

I would like to add that our fuel can be adapted to a new reactor and technically the company is ready to deliver it both to Rivne NPP and Khmelnitsky NPP earlier than this term. There are just some administrative moments.

This will be the same fuel used at Zaporizhzhya NPP and South Ukraine NPP.

– Will there be pilot supplies of Westinghouse fuel for WWER-440 power units?

– At the moment we are in the process of fuel licensing for WWER-440 not only in Ukraine, but also in other countries. In the past, we have already supplied fuel for such power units. The current contract stipulates that the parties will work to license this fuel and implement it at RNPP-1 and RNPP-2.

– Atomenergomash is currently under the qualification period. As soon as Westinghouse confirms that Atomenergomash complies with all requirements, the Company will use it as a supplier of components for fuel, which then will be supplied to Ukraine.

In the contract signed with Energoatom, our Company confirmed that we are ready to cooperate with Atomenergomash as a supplier of components for nuclear fuel, if it passes a verification process.

– How much time will the check take?

– This will surely happen no later than 2021. This can also happen earlier and we will be happy to use these components.

– What is the progress in the implementation of other projects of Westinghouse interaction with Energoatom? For example, earlier you talked about the project on increasing performance, power and efficiency of reactors in Ukraine.

– We are still interested in these projects and discussions about them continue.

These projects were not discussed in a recently signed contract. Some minor agreements on control systems were signed as well. There will be a separate contract under the named projects. Negotiations are ongoing.

– Energoatom plans to announce a tender for the selection of partners for the project “Ukraine-EU Energy Bridge”. Will Westinghouse participate in it?

– This is a very important project for Ukraine and it is interesting for Westinghouse. Currently, Westinghouse assesses requirements for the project and discusses it. If requirements and our interests coincide, we will strive to become a partner in this project.

Westinghouse will be happy to provide assistance in building a bridge to Europe, which will allow export of energy to Europe.

– What will you say about the production of small modular reactors (SMR) in Ukraine?

– Westinghouse does have some SMR developments and the Company will be happy to negotiate on this issue.