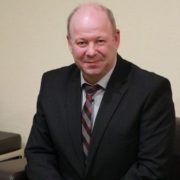 Burkhard Cramer told us about PreussenElektra GmbH in Kyiv during a working visit to the State Scientific and Technical Center for Nuclear and Radiation Safety (SSTC NRS).

Mr. Cramer is currently Vice President of PreussenElektra GmbH and has over 26 years of experience in the field of nuclear energy.

Mr. Cramer shared information on PreussenElektra GmbH establishment, its role in power supply in Germany and further closure of all NPPs by 2022 with the Uatom.org Editorial Board. – Mr. Cramer, how long have you been working for PreussenElektra GmbH?

In 2016, it was decided to separate PreussenElektra GmbH from E.ON Kernkraft GmbH, on the grounds that nuclear and renewable energy should be better developed separately.

Hence, I have been working for E.ON Kernkraft GmbH since 1993 and for PreussenElektra GmbH since 2016.

– What does PreussenElektra GmbH do? Please outline the range of services provided by the company

The oldest, Würgassen NPP was commissioned in 1971 and shut down in 1995. Its dismantling has been almost completed. Only the containment building of this nuclear power plant is left.

Stade NPP was put into operation in 1972 and shut down in 2003. It is currently at the final stage of dismantling.

Unterweser NPP, Isar 1 NPP and Grafenrheinfeld NPP were commissioned in 1978, 1979 and 1981, respectively. Unterweser and Isar 1 NPPs were shut down in 2011, and Grafenrheinfeld NPP was shut down in 2015. These three NPPs are at the stage of operation after reactor shutdown and the licensing process of their dismantling has been terminated lately or is still underway.

Other three NPPs are currently in operation: Isar 2 NPP, Grohnde NPP and Brokdorf NPP. All of them operate on the highest safety level and have a very high production rate. However, according to the political decision, all nuclear power plants in Germany have to be closed until 2022. The same is expected for these three NPPs.

– Who manages the company?

– The company is managed by the Directorate consisting of the President, Technical Director, Dismantling Director, Director for Human Resource Management and Financial Director.

We also have a supervisory board in PreussenElektra GmbH involving 12 people. These people ensure oversight of the management process.

– What workforce does PreussenElektra GmbH have?

– About 2000 specialists work here now. Our offices are placed at the sites of eight NPPs with the headquarters in the city of Hanover.

– Mr. Cramer, what is the objective of your visit to Ukraine?

– We came to Ukraine to establish cooperation. Being the operator of the world’s safest nuclear power plants, we have much to offer you. This may involve expert support in the construction of new nuclear power plants and in the operation and decommissioning of nuclear facilities. We also train personnel in all these areas. Hence, we may help to make your nuclear energy even safer, more reliable and economical.

– Have you cooperated with Ukraine before?

– With whom have you established cooperation?

– In fact, with many countries. Nevertheless, the most fruitful cooperation is with the United Arab Emirates. Perhaps, one of the few countries with which we do not want to cooperate is North Korea.

– What challenges has PreussenElektra GmbH to overcome today?

– I think the most serious challenge is shutdown of all nuclear power plants in Germany until 2022. PreussenElektra GmbH will have to close three operating NPPs, which help to stabilize the power grid and compensate the time during which the sun is not shining and the wind is not blowing.

Taking into account the current situation, we have three main objectives: the first is to ensure stable power supply in Germany until 2022, the second is to take care of the safe dismantling of all NPPs that we manage, and the third objective is to provide assistance to other countries in all areas of PreussenElektra GmbH’s activities.

A peculiar challenge for us is to support youth in the company. Young specialists have recently realized the lack of prospects in the future and thus leave the industry.

– Do you have any experience in NPP operation in the daily load-following mode or in thermal power uprate?

– We successfully used both the load-following mode and power uprate at all our NPPs.

However, today these issues are not as relevant as the development of renewable energy in the country. According to the political decision, the production of solar and wind energy should annually increase, in order to completely replace nuclear energy in the grid after 2022.

– Will Germany have enough renewable energy sources to provide the country with electricity? If not, wherefrom will you import it?

– It is a good question. In fact, if we talk about 2022, I do not think Germany would manage to completely replace nuclear energy by renewables. As regards 2050, I think there are all the chances. In this case, the problem is not so much the production of energy as its storage. Just think about this: when there is not much sun and wind in Germany? And when is the coldest season? …

Concerning import, I believe that every EU country would not mind selling electricity to us. At the time being, France, Czech Republic, Poland and Switzerland are the suppliers for Germany.

– Mr. Cramer, was the governmental decision to close all nuclear power plants by 2022 reasonable? What is your opinion?

– I personally think that it is not reasonable to close all NPPs by 2022. German NPPs operated by PreussenElektra GmbH are the safest in the world. Since 1971, we have produced over 2000 billion kW/h of electricity, while the efficiency of power units has been about 90%. This is why our NPPs have become and still remain the leaders in the world’s electricity production.

Anyway, we have no authority to change the political decision. Therefore, we make every effort to ensure operational safety of NPPs until 2022 and prepare for further dismantling.