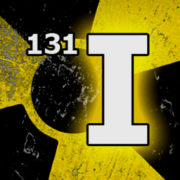 According to the State Specialized Enterprise EcoCentr, which provides continuous radiation monitoring of the lowest atmospheric layer in the Chornobyl Exclusion Zone by air sampling with the help of stationary aspiration installations, increase in the activity concentration of iodine-131 (131I) within 2.1-3.3 x 10-6 Bq/m3 was recorded at four monitoring stations during 18-23 February 2018.

The detected content of artificial iodine-131 is above the minimum detected level of measuring devices, and these concentrations do not pose risks to safety of the public and the environment and prove the ability of current radioecological monitoring systems to record insignificant changes and fluctuations in radiological conditions.

According to the prompt message of the Ukrainian Hydrometeorological Center of the State Emergency Service of Ukraine (SESU), traces of iodine-131 were not detected at the air monitoring stations in Kyiv.

At the air monitoring stations in the Ukrainian NPP observation areas, the activity of iodine-131 on 18-27 February 2018 was below the minimum detected values: 8.5 x 10-7 Bq/m3.

Competent authorities of Norway and Finland also reported the detection of insignificant concentrations of iodine-131 in air samples in February 2018.

The SNRIU jointly with the Ukrainian Hydrometeorological Center of the SESU, EcoCentr of the State Agency of Ukraine on Exclusion Zone Management (SAEZ) and Energoatom NPPs continues to analyze the situation.

It is to be recalled that the cases of iodine-131 detected in the air of European countries were reported on the SNRIU website in October 2016 and February 2017.

Reference: iodine-131 is a beta and gamma emitter with a half-life of 8.04 days. Man-made sources of this isotope may be plants for irradiated nuclear fuel reprocessing, NPPs and nuclear explosions.

IAEA: Ukraine Completely Fulfills Agreement on Application of Safeguards in...