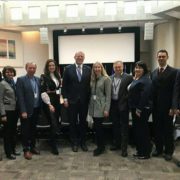 The next working group meeting of the G7 Global Partnership against the spread of weapons and materials of mass destruction took place in Ottawa, Canada on 1-2 February 2018.

The Head of the Working Group meeting and representative of Canada stated at the opening of the event that the Global Partnership is today at crossroads since the level of interest and resources of the participating countries have significantly decreased compared to the first years of the Initiative. The Head noted that Canada’s goal was to rearrange the partnership and give a new impetus to its development. Canada conducted a number of studies for this including the analysis of historical factors and aspects of the main mission of the Initiative. The Head presented to meeting participants his vision and a plan of further activities in the end of his speech.

The organizers chose a new approach to enhance coordination among three working groups under the Initiative and held a simultaneous meeting of the Non-Proliferation Directors Group (NPDG), Global Partnership Working Group (GPWG) and Nuclear Safety and Security Group (NSSG). As a result, the organizers received positive feedback from participants. The joint meeting and participation in the joint thematic sections allowed discussing current issues under more favorable conditions, determining the ways for their solving and specifying the details to develop the agreed and coordinated initiatives.

Mark Gwozdecky, Assistant Deputy Minister of Canada, International Security and Political Affairs, opened the joint section of NPDG and GPWG. He noted that balanced coordination of Global Partnership policy and programs is very important for the Initiative. Section Chair Louis-Martin Ume called on the participants to discuss and prioritize the main areas that are problematic in terms of weapons of mass destruction including North Korea, Iran, Syria and Africa. A joint presentation of Sweden, the United States of America and Ukraine on best practices, coordinated approaches and challenges related to the implementation of nuclear security programs and policies in Ukraine was also presented under this section. The representatives of France closed the section presenting to participants a report on the proliferation of rocket weapons. After that, they assured that they would continue to research this topic in the future, particularly in the context of the Global Partnership.

The joint section of NSSG group and NRSWG sub-working group (Nuclear and Radiation Safety Sub-working Subgroup) was devoted to the legal framework for nuclear safety. As a result, participants were able to identify the priorities for 2018, determine further cooperation areas including potential coordination of the development of a regulatory framework for nuclear safety and security, especially with regard to radioactive sources, computer security and gender equality.

The representative of the Ministry of Foreign Affairs of Canada noted under GPWG final plenary meeting that a large scope of activities is planned for 2018 under the Initiative and noted that gender equality should be the main issue of the Global Partnership Program. “Not because it is correct, but because it’s more efficient and will allow achieving better results”, he concluded.

Canada was in general satisfied with the participation level of the member countries of the Initiative in this meeting. The final meeting in 2018 is scheduled for November in Ottawa.

According to the Ministry of Energy and Coal Industry of Ukraine

Registration of Iodine-131 in Atmospheric Air

OSCE Submitted Quadcopters and Modern Communication Tools to Be Used during...
Scroll to top