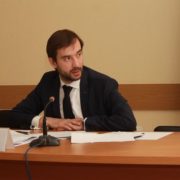 Uatom.org Editorial Board spoke with Hryhorii Plachkov, SNRIU Chairman, on the national nuclear regulator’s position on this matter. – Mr. Plachkov, would you please tell our readers about the history of neutron source construction?

– The neutron source based on a subcritical assembly driven by a linear electron accelerator is being constructed at the Kharkiv Institute of Physics and Technology (KIPT) according to agreements of the Washington Nuclear Security Summit set forth in the Joint Statement of the Presidents of Ukraine and the United States in April 2010 and the Memorandum of Understanding between the Government of Ukraine and the Government of the United States Regarding Cooperation on Nuclear Safety signed on 26 September 2011.

More than 80 million dollars was allocated for the neutron source construction as compensation for the export of all high-enriched uranium from Ukraine.

– Why was the KIPT territory selected for the neutron source construction?

– The place was selected in accordance with current legislation of Ukraine.

KIPT developed the feasibility study for the construction of the neutron source. The document compared three possible options for neutron source siting.

The analysis of the feasibility study carried out by the State Central Ukrainian Construction Review Service Ukrderzhbudekspertyza (with involvement of SNRIU and SSTC NRS into the review of nuclear and radiation safety issues) confirmed the feasibility of the KIPT site for the neutron source in terms of technical and economic indicators, as well as nuclear and radiation safety.

In 2011, the Kharkiv City Council held public hearings on the construction of the neutron source on the KIPT site. In 2012, the Cabinet of Ministers appointed KIPT as the operating organization, approved the above-mentioned feasibility study, and agreed on the neutron source location.

– What challenges did SNRIU face in the initial project stage?

– At that time, SNRIU faced two major challenges. First, there was no experience in regulating the safety in construction of such facilities. Second, there were no regulations to govern nuclear and radiation safety of such facilities.

That is why SNRIU experts began to study international experience in this area in 2011. In addition, the regulatory document “General Safety Provisions for the Nuclear Subcritical Assembly” was developed in 2011-2012 and was registered by the Ministry of Justice of Ukraine in April 2012.

– When did SNRIU issue the license to KIPT for the construction and commissioning of the neutron source?

– In December 2012, the SNRIU Board approved the regulatory review conclusions for the preliminary safety analysis report for the neutron source.

In May 2013, the Cabinet of Ministers approved the neutron source construction project. In July, KIPT received a construction permit from the State Architectural and Construction Inspectorate of Ukraine.

In October 2013, SNRIU issued a license to KIPT for the construction and commissioning of the neutron source.

– It has been more than four years, why the neutron source still has not been commissioned?

– At present, construction efforts are in their final stage.

In 2013, KIPT started construction and commissioning efforts and began development of technical specifications for equipment important to safety of this nuclear facility and their agreement with SNRIU in compliance with the above-mentioned SNRIU license. The operating organization also continues the development of operational documentation and its agreement with the nuclear regulator.

The facility cannot be commissioned now because KIPT still has to receive three individual permits for the first delivery of nuclear fuel to the industrial site, initial criticality of the neutron source, and its trial commercial operation. In order to obtain these three permits, the operating organization is to submit a complete package of required documents to SNRIU.

– The neutron source construction project was implemented jointly by Ukraine and the United States. The construction was funded by the U.S. party. Why U.S. funding has been terminated? Who is to blame for this? What, in fact, is the problem?

– I think this question should be referred to KIPT as the operating organization and to the National Academy of Sciences of Ukraine as a state administration body.

SNRIU is an independent nuclear regulatory body. Neutron source funding is beyond our competence.

– Well, then the next question is completely in your competence. After the neutron source is commissioned, will radiation background change in Kharkiv?

– Findings of the regulatory review for the preliminary safety analysis report indicate that commissioning and operation of the neutron source will not affect radiological background in the city of Kharkiv. The permissible radiation levels for personnel and the public and levels of radioactive releases and discharges to the environment in normal operation, abnormal operational occurrences, and emergencies meet the requirements established in radiation safety standards of Ukraine.

– At present, there are many mass media reports stating that the neutron source is a unique facility and is of great importance for the development of national science, energy, and medicine. What exactly is this uniqueness?

– Yes, in fact, the neutron source is a novel nuclear facility with up to 300 kW power in the core.

Proposals to use subcritical assemblies first appeared in the mid-1950s. However, they could not be implemented for a long time because powerful neutron generation capabilities were missing. Nevertheless, accelerating physics and engineering developed with time. Nuclear energy was evolving as well, so there was an increasing need for research of subcritical systems. Research in various fields of science and medicine became relevant as well.

The main purpose of the neutron source is scientific and applied research in nuclear physics, radiation materials science, biology, and chemistry. In addition, the neutron source will allow Ukraine to start its own production of medical radioisotopes. Today, they are imported to Ukraine from other countries.

– Is there a research program for the neutron source?

– I cannot say for sure as we have not received a business plan or research program for the neutron source from KIPT so far.

– Belgium currently constructs a similar research facility, Myrrha, which you mentioned earlier. The operational and experimental components will be separated: research can be conducted by scientists from various research organizations. Will scientists of external organizations have access to the neutron source? After all, this can bring additional funding?

– The Myrrha construction is scheduled to be completed in 2030. Hopefully, the neutron source will be commissioned earlier.

As regards the separation of operational and experimental components, this principle is a worldwide practice. One way or another, safety always remains the highest priority all over the world, so operating personnel can stop an experiment at any time if at least the slightest signs of a negative impact on safety of the nuclear facility are detected.

Again, the question about access of scientists from other organizations to the neutron source should not be addressed to me. We do not interfere with KIPT economic activities. Our task is to ensure that all research efforts at the facility are carried out in strict compliance with the nuclear and radiation safety requirements.

– Yes. The neuron source operational personnel, as well as personnel of any other nuclear facility, have to undergo special training on the programs agreed with SNRIU. In addition, the officials who perform organizational and regulatory functions related to nuclear and radiation safety must necessarily obtain individual SNRIU licenses. As of 1 March 2018, we issued four such licenses to KIPT.

– The neuron source lifetime is 40 years. The basic decommissioning principles and strategy for the neutron source were agreed by SNRIU in 2012.

I do not know whether KIPT will manage to provide us with a complete set of documents for agreement. It is hoped they will and the neutron source will finally be commissioned.

Energoatom and Holtec Signed Memorandum of Understanding on Cooperation in Using...