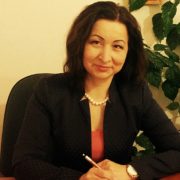 For Ukraine, as well as for other countries, nuclear and radiation safety is very important. There are 15 NPP units in operation in the country, three Chornobyl NPP units under decommissioning in the Chornobyl exclusion zone, and Chornobyl unit 4, which together with the Shelter under the New Safe Confinement (NSC) is being transformed into an environmentally safe system. It is also necessary to note spent fuel and radioactive waste management facilities and other facilities that use radiation sources for industrial, medical, and research purposes. All of them are operated by people who are aware of the potential risks of ionizing radiation and work hard for the country’s benefit.

Appropriate dose accounting and control registers were established in other countries to monitor personnel doses. Ruslana Tripailo, Deputy Head of Radiation Safety Department of the State Nuclear Regulatory Inspectorate of Ukraine – Head of the Radiation Source Safety Division – State Inspector – tells us about the history of establishing such a system in Ukraine, as well as about the issues and prospects in this area. The decision to establish the Unified State System for Control and Accounting of Individual Doses was made in late 1990s.

In 1999 and later in 2001, two Cabinet Resolutions, No. 406 and No. 379, were adopted to approve the procedure for establishing the Unified State System for Control and Accounting of Individual Doses. The Ministry of Health of Ukraine was responsible for coordinating the establishment of the system.

In 2014, this function was included into the Statute of the State Nuclear Regulatory Inspectorate of Ukraine, approved by Cabinet Resolution No. 363 dated 20 August 2014. In fact, SNRIU acquired the above-mentioned function only at the end of 2014.

At the end of 2014, the first national intercalibration of the individual dose measurement and monitoring laboratories was organized and performed jointly by the National Medical Academy of Sciences of Ukraine and SNRIU. The event was organized to evaluate the quality of individual dose measurement in Ukraine. Upon completion, a list of laboratories that had successfully passed the intercalibration was submitted to the corresponding licensees.

In 2014, SNRIU also developed draft Cabinet Resolution “On Approval of the Procedure for Establishing the Unified State System for Control and Accounting of Individual Doses”.

This draft required revision to comply with international and European radiation safety standards. In particular, it was needed to implement new approaches to national systems for control and accounting of individual doses. These are Articles 41-44, 51 and Annex X of the Council Directive 2013/59/Euratom dated 5 December 2013 and paras. 19-25 of the International Basic Safety Standard: Radiation Protection and Safety of Radiation Sources, General Safety Requirements Part 3, published in 2014.

In accordance with the above international requirements, the competence of the regulatory bodies includes the establishment and support of national dose registers for the personnel working in zones affected by ionizing radiation resulting from nuclear energy activities. “Such a register would contribute to the optimization of occupational doses,” Ruslana Tripailo notes.

In compliance with the European and international safety standards, the licensees and registrants are responsible for control of occupational doses, radiation monitoring at workplaces, drawing up a list of persons that undergo individual dose monitoring (IDM) and IDM data storage. Other organizations, institutions (measurement laboratories) may be in charge for providing consultation and engineering and guidance support for determination (measurement and calculation) of occupational doses.

National registers of occupational doses should also cover the accounting of doses for personnel who work at plants with natural radionuclide background, aircraft crews, individuals temporarily involved in activities carried out in zones subject to ionizing radiation (employees of coal, iron and uranium mines, construction companies, state inspectors and others).

The national legislation is currently revised to comply with international and European standards, including this area.

“To comply more fully with the European legislation, we have studied in detail the experience in establishing the corresponding dose registries of other countries”, Ruslana Tripailo says. “Currently, national dose registers have been established and implemented in Turkey, Lithuania, Greece, Portugal, Montenegro, Macedonia and Croatia. As for the number of registered persons, the closest to Ukraine is Greece, where 32,610 persons have been registered. According to unofficial data, there are about 40,000 such persons in Ukraine”.

According to Ruslana Tripailo, Lithuania’s experience can serve as an example for Ukraine, where a Unified Register of Occupational Doses and Radiation Sources has been in operation since 1999.

Most countries use RAIS (information program) as the software for accounting of occupational exposure doses, in particular, in use of radiation sources. RAIS was developed by IAEA to support regulatory activities and allow, among other things, individual occupational doses to be accounted for.

“In conditions of limited resources, the most effective and feasible way at the initial stage to solve the issue of unified accounting and registration of doses may be extension of functions and authorities of the State Register for Radiation Sources”, Ruslana Tripailo thinks.

According to Ruslana Tripailo, this would have a number of advantages. First, the information system of the Radiation Source Register is based on the RAIS platform. After upgrading, it can be used to enter data on annual effective occupational doses. Second, the data can be entered by staff of the Radiation Source Register, which will thus save the budget needed for salaries, consumables, etc. Third, the information provided by the licensees in annual safety analysis reports can be used to enter the doses to the Register database.

“Besides the optimization of occupational doses, being the main objective of establishing the Unified State System for Control and Accounting of Individual Doses, one should keep in mind other, no less important priorities”, Ruslana Tripailo continues.

First, they include the introduction of a unified guidance approach to determine and assess individual occupational doses in Ukraine and ensure the quality of measurements, which will improve radiation protection of nuclear facilities and staff working environment. Second, they focus on the achievement of the most reliable results of individual dose monitoring by developing the technical capabilities and competences of measurement laboratories. Third, it is important to further develop the Unified State System for Control and Accounting of Individual Doses to account for doses for critical groups of the public, employees of plants with natural radionuclide background and radon irradiation, and aircraft crews. “As for the latter, these are new constituents of the international radiation protection system that are still to be implemented in Ukraine”, Ruslana Tripailo summarizes.

‘Polyn Star’ Museum to Open for Visitors in Chornobyl