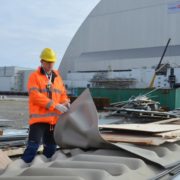 A sealed membrane was installed in points where eastern end wall of the Arch joins the existing structures of block B in the main building of Chornobyl NPP Stage II. It formed a barrier to prevent radionuclide release from the internal contaminated space into the environment.

“Membrane installation will ensure radiation safety of the Shelter for 100 years, which is the main NSC function. Although the activities have been performed under extremely severe radiological conditions, the personnel of ChNPP and contractors demonstrated high professionalism”, SAEZ Chairman Vitaly Petruk said.

According to ChNPP, the membrane was fastened on block B structure by special metal sealing anchors. Preparatory activities were performed earlier in the facility to remove foreign objects and partly eliminate post-accident concrete layer in order to provide a smooth foundation under the anchors.

According to Vladimir Kashtanov, chief engineer of the project management team for the Shelter Implementation Plan, certain difficulties arose during the activities related to high radiation levels in the work areas and significant overloading of concrete ceiling with valves, metal and high-level items that led to the need for additional resources. Completion of these activities became one of the key stages of the critical path of the project.

Vladimir Kashtanov noted that complex activities were started in August 2017, dealing with drilling of holes for fastening details of the anchors in the design position in block B ceiling at elevations +75.58, +72.10, and +67.66. Sixty holes with a diameter of 400 mm with drilling depth in ceiling slabs from 600 mm to 900 mm were made.

“Russian Nuclear Garrote: Get Free Once and Forever”
Scroll to top