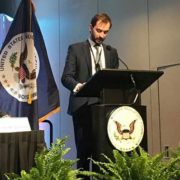 At the beginning of his speech, Hryhoriy Plachkov noted the following: “In recent years, many countries have faced challenges that forced them to strengthen physical protection measures at nuclear facilities and consider the nuclear security regulation in terms of the increased number of terrorist acts all over the world. Over the last four years, Ukraine faced unprecedented challenges caused by conflicts in some districts of the Donetsk and Lugansk regions and the temporarily annexed Autonomous Republic of Crimea. Therefore, the implementation of strict national measures and strengthening of cooperation with other countries to develop joint integrated efforts to protect nuclear facilities are prerequisites for overcoming the existing challenges”.

SNRIU Chairman highlighted aspects of the Ukrainian State Physical Protection System, especially important in the hybrid war conditions, and revision of the Design-Basis Threat for nuclear facilities, nuclear materials, radioactive waste and other radiation sources in Ukraine. Hryhoriy Plachkov also paid attention to the system for monitoring of radioactive materials at the state border crossing points and measures implemented in Ukraine in the framework of the Global Partnership initiative.

At the end of his speech, SNRIU Chairman pointed out the following: “Analysis of the current state of nuclear security in Ukraine and throughout the world emphasizes the need for and importance of more active countermeasures to withstand the existing threats, including the insider threat, which also complies with IAEA recommendations. Because of current challenges to international security and active use of hybrid practices of illegal acts, special attention should be paid to potential insider threat, anti-sabotage measures, and strengthening of nuclear security culture. It is necessary to intensify the exchange of information on potential insiders, their objectives, methods, and tactics at the level of international law agencies and organizations such as Europol and Interpol”.