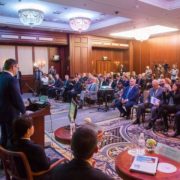 The preliminary feasibility study for installation of the land-based solar panels in the Exclusion Zone, which was sponsored by Tractebel Engineering Company with the financial support of the French government, was presented in Kyiv. The estimated plant capacity will make up 1.2 GW.

The feasibility study for 2017 with funding by the Ministry of Economy and Finance of France confirmed the possibility for construction of 1.2 GW solar power plant in the Exclusion Zone around the former Chornobyl NPP from a technical and commercial viewpoint.

The State Agency of Ukraine on Exclusion Zone Management with the support of the Ministry of Environment and Natural Resources started effective activities to implement this ambitious plan aimed at the Exclusion Zone transformation into alternative energy territory and installation of solar energy facilities in December 2016. “Given the interest of the investors, we decided to involve international experts in the field of alternative energy into the analysis and development of the feasibility study on the project. In June 2017, the French government decided to provide financial support for the implementation of the feasibility study for solar park construction in the Exclusion Zone”, Ostap Semerak said.

This project received support at the highest state level. The President of the French Republic Emmanuel Macron expressed his interest in taking part in the project in June 2017 during the meeting with Ukrainian President Petro Poroshenko. Photo (left to right): Ambassador of France to Ukraine Isabelle Dumont, Minister of Environment and Natural Resources of Ukraine Ostap Semerak and Chairman of the State Agency of Ukraine on Exclusion Zone Management Vitaly Petruk

“Announcing the strategy “Chornobyl, the territory of change”, we realized that we should find the possibility of at least partial use of existing energy and transport infrastructure in the Exclusion Zone. These lands are unsuitable for most types of economic activity, but the construction of alternative energy facilities on this territory will restore the economy in the region with minimum environmental risk. Thanks to the feasibility study of the French company we can say now that the construction of a solar power plant in the Exclusion Zone is possible, and this project will be an important step towards transformation of the contaminated areas into a real territory of change”, SAEZ Chairman Vitaly Petruk informed.

According to him, work with French colleagues was perceived by the Agency’s employees with enthusiasm. It was hard, but definitely interesting and creative. Experts have gained a good experience in the light of best international practices in the development of feasibility studies for the implementation of alternative energy projects. “A lot of routine preparatory activities were performed to say today “the project is possible”. Frankly speaking, we did not expect such interest from the public and investors, and such support from the Government. I want to thank the employees of the international department of the Agency, who will soon start to speak French, I think; dosimeters who probably know every hill on the sites selected for the project, as well as our power engineers, the true patriots of the Chornobyl energy infrastructure. It was a really interesting cooperation”, Vitaly Petruk commented.

According to the Ambassador of France to Ukraine Isabelle Dumont, the implementation of this project will contribute to strengthening the energy independence of Ukraine, which will positively affect the state of the economy in the country. That is why a decision was made under the strategic partnership between the Government of Ukraine and France to finance the said feasibility study. French experts conducted unique comprehensive and complex activities whose results have been presented to the world today.

“I believe in successful implementation of this ambitious project of Ukraine”, Isabelle Dumont emphasized.

Photo: Ministry of Environment and Natural Resources of Ukraine

“Russian Nuclear Garrote: Get Free Once and Forever”