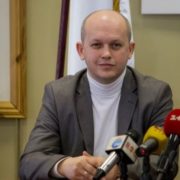 The matter of establishing a reserved area in the Chornobyl exclusion zone has been brought up by scientists and the public for years. A number of working meetings has been conducted since 2013 with participation of the National Ecological Center of Ukraine, Ministry of Environment and Natural Resources, State Agency of Ukraine on Exclusion Zone Management, National Academy of Sciences of Ukraine and other organizations to address the establishment of a biosphere reserve. Finally, the President of Ukraine, Petro Poroshenko, signed an associated Decree in 2016.

Today, the biosphere reserve is an area of over 226 thousand hectares with a variety of flora and fauna. Head of the Chornobyl Radiation and Environmental Biosphere Reserve, Taras Melnychuk, told us about activities of the biological reserve team. – Please tell us about the purpose and funding for establishing the Chornobyl Radiation and Environmental Biosphere Reserve.

– The Chornobyl Radiation and Environmental Biosphere Reserve was officially established exactly 30 years after the Chornobyl accident, on 26 April 2016.

The main purpose of the reserve was to preserve its unique flora and fauna, stabilize the hydrological regime, remediate the land contaminated with radiation, and conduct research in the field of environment, natural science, and geography.

Currently, the reserve is financed from the state budget, but it is planned to involve international investors as well.

– What is the number of your staff members?

– There are 35 staff members. However, this number is not sufficient for the appropriate survey of the territory that has not been serviced for more than thirty years and has radiation contamination. In the future, we plan to gradually complete the staff to 600 persons.

The reserve’s main office is located in the urban settlement of Ivankiv, and part of the administrative staff is located in Kyiv.

The Chornobyl Radiation and Environmental Biosphere Reserve has several structural units: Department for Public Awareness and Eco-Education, Department for Ecology of Flora and Fauna, Legal Sector, Animal Reproduction and Preservation Department, and other departments that support the reserve’s activities.

– The biosphere reserve occupies two thirds of the Chornobyl exclusion zone’s territory. Is the reserve territory going to be separated in some way from the ten-kilometer area around the Chornobyl NPP, where a number of spent nuclear fuel and radioactive waste management facilities are located?

– The biosphere reserve is located in Ivankiv and Polissia districts, within the exclusion zone. The total reserve area is almost 227 thousand hectares, which makes it the largest in the country.

The ten-kilometer area around the Chornobyl NPP does not belong to the reserve’s territory. As we all know, there are a number of spent nuclear fuel and radioactive waste management facilities.

Since the biosphere reserve is a nature protection area, the law envisages its functional zoning. Four zones are to be allocated: reserve, buffer, controlled regime, and anthropogenic landscape zones. Each of them involves a different degree of economic activities: from the total prohibition of economic activities in the reserve zone to limited activities in the anthropogenic landscape zone.

The protected areas with the ten-kilometer area around the Chornobyl NPP will be separated along natural boundaries: roads and canals. Along the boundary lines, appropriate state-approved signs and shields will be installed. Boundaries in the form of fences are not acceptable since they will prevent the migration of wild animals.

– What are the reserve’s inhabitants now? Are there rare animals or plants?

– At present, there are about 400 species of animals, birds, and fish in the exclusion zone. 67 of them are listed in the Red Book of Ukraine. The same is the case with flora: 61 out of the 1,228 species found on the territory are rare. Scientists are happy with the renewed population of brown bears that are unique for Polissia territories, as well as elks, wolves, bobcats, deer and, curiously enough, Przhevalski’s horses that were brought here in the 1990s.

Rare black storks began to appear here, and so did raccoon dogs that were unusual for this region. The giant noctule bat, featuring untypical sizes, is a unique species.

During the 30 years after the accident, fish species enriched as well, new fish appeared. In the rivers, there are 59 species of bony fish, 9 of them being listed in the Red Book of Ukraine, including the Ukrainian lamprey belonging to cyclostomes.

In general, the Chornobyl animals are no different from the ordinary ones, but they are less fearful because have never met with the man. The stories about anomalies and mutants are an exaggeration. The only truth is about creatures whose size exceeds the standard one. One can find here two-meter pikes and half-meter catfish. Owing to and in spite of the anthropogenic catastrophe, a unique natural area for the development of rare species of flora and fauna has formed within the 30-kilometer exclusion zone.

– What is the reserve staff doing today?

– First and foremost, the reserve is intended for fundamental and applied research. This is actually the task of the dedicated Department for Ecology of Flora and Fauna.

At the initial stage, this department aims to generalize and systematize the scientific data obtained by researchers from different organizations during the time that passed after the Chornobyl accident. The Chronicle of Nature is the main reporting document of the Department for Ecology of Flora and Fauna. Our researchers are working fruitfully on its development and going to publish it soon.

As the department is staffed with researchers in different areas, they also plan to conduct their own expeditionary surveys of flora and fauna.

Equally important is the focus of activities on education and awareness increase for the population in the Ivankiv and Polissia districts. To this end, the Department for Public Awareness and Eco-Education was set up. The department’s experts work with the population on a permanent basis, tell about the reserve’s mission, and give lectures for the youth.

– In February, you signed a cooperation agreement with the Drevliany reserve. For what purpose?

– The Chornobyl and Drevliany reserves are located in Polissia, in similar natural climatic conditions on the area contaminated with radionuclides. Both reserves have similar flora and fauna. Since the Drevliany reserve was established much earlier, it already has specific achievements and research results.

We signed the agreement to exchange experience and conduct joint research in the future.

– Who else are you cooperating with? Do you have some international projects in the area?

– Today, we are conducting joint research with the Kyiv Zoological Park of national importance. Together we study the behavior of mammals in the exclusion zone, observe Przhevalski’s horses, and collect material on the environment of predators.

As far as international cooperation is concerned, we have a joint UNEP (United Nations Environment Program) project. The project is called Conserving, Enhancing and Managing Carbon Stocks and Biodiversity in the Chornobyl Exclusion Zone.

We also have a joint project between Ukraine and Belarus, which is implemented with OSCE support within the campaign for increasing awareness on forest fire prevention and rules of conduct when forest fires are approaching the territories adjacent to the exclusion zone. In the future, I would like to extend cooperation and launch new projects with both UNEP and OSCE.

In general, international cooperation, in particular international research, is one of the top priority areas for the Chornobyl Radiation and Environmental Biosphere Reserve. We are ready to cooperate with various international organizations and I believe we have much to offer.