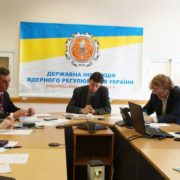 On 4 April 2018, a meeting of the Public Council under the State Nuclear Regulatory Inspectorate of Ukraine was held. A number of urgent issues important for nuclear and radiation safety of the state were considered within the event.

In particular, he informed that the design lifetime of ZNPP-4 would expire on 4 April 2018. Last week, during the SNRIU Board meeting, a decision was made to allow operation of this power unit in a shutdown state with full nuclear fuel unloading from the reactor core. On 2 April 2018, nuclear fuel was unloaded from the reactor core and located temporarily in the spent fuel pool. Unit operation renewal is possible only based on the results of the state nuclear and radiation safety review after implementing a number of relevant measures by the operating organization.

After the report of the SNRIU representative, members of the Public Council initiated a discussion on the Environmental Impact Assessment of the Zaporizhzhya NPP. This document has been undergoing an environmental review of the Ministry of Ecology and Natural Resources of Ukraine for about two years. As a result, it was decided to appeal to the Ministry of Ecology regarding this document. During the meeting, the Public Council also addressed the issue on radiation safety state in the occupied territories of Ukraine and along the delimitation line with the ORDLO. In particular, it was proposed to send a letter to the Ministry of Defense of Ukraine with a proposal to implement dosimetric monitoring at the checkpoints along the delimitation line. “Thus, at least we will be able to prevent the entry of radioactive waste and radiation sources into controlled state territories”, Taras Kozulko, Head of the SNRIU Section on Information-Analytical Support and Public Relations said.

Representative of public organization “Ecodiia” Yurii Urbanskyi, in turn proposed to appeal to the Ministry of Defense of Ukraine with a proposal to implement dosimetric monitoring of the places of deployment of Ukrainian military forces. The members of the Public Council supported two proposals by an overwhelming majority of votes.

SNRIU Chairman Hryhorii Plachkov initiated a discussion on the construction of the 750 kV overhead line Zaporizhzhya NPP-Kakhovska reminding that commissioning of the facility would improve power supply of Kherson and Odesa regions, as well as free “closed” capacities of ZNPP. Having heard the Chairman, the members of the Public Council decided to appeal to the Ministry of Energy and Coal Industry of Ukraine to clarify the current status of the project.

The work plan of the Public Council for 2018 was approved at the end of the meeting.