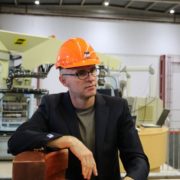 Eight power units at three NPPs are currently operated in Sweden: four units at the Ringhals NPP, one unit at the Oskarshamn NPP, and three units at the Forsmark NPP.

Since there is a significant number of power units in operation and under decommissioning, considerable attention is paid to radioactive material management in Sweden.

Uatom.org Editorial Board succeeded to get behind the scenes of five spent nuclear fuel and radioactive waste management facilities of SKB Company and learn many interesting things about them.

The travel started with the Canister Laboratory in Oskarshamn. Stefan Barigli, an expert of the SKB PR Department, met the Ukrainian delegation. He started his story with spent fuel management system in Sweden. Anyway, all spent fuel from Swedish NPPs enters the city of Oskarshamn, where the Central Interim Storage Facility for Spent Nuclear Fuel (Clab) is located. Spent fuel is mainly transported by specially equipped SIGRID ship. This is the most convenient way of spent fuel transport for Sweden because all nuclear power plants in the country are located on the coast.

Spent nuclear fuel is stored in Clab spent fuel pools at a depth of 30 meters under water. The storage facility is interim because it envisages storage for 30-40 years. After that, spent nuclear fuel is to be raised to the surface, placed into canisters and transferred for permanent disposal in a final (geological) repository. Spent nuclear fuel will be stored there for at least hundred thousand years. Spent nuclear fuel will be placed into canisters at an encapsulation plant; the construction technologies for this plant are currently under development in the Canister Laboratory in Oskarshamn.

The Laboratory also performs a series of different tests, checks canisters for strength and quality of welds and looks for different defects to be eliminated. Significant attention is paid to quality of the outer surface of canisters. Canisters will be manufactured in Sweden after the encapsulation plant is constructed in Oskarshamn, and there will be no need for export anymore.

After familiarization with the Canister Laboratory, the Ukrainian delegation visited the Clab Central Interim Storage Facility for Spent Nuclear Fuel. The storage facility was commissioned in 1985 and is located in Oskarshamn as well.

Spent nuclear fuel is mainly transported to the Clab storage facility in properly equipped SIGRID vessel. This vessel is specially designed to transport spent nuclear fuel; if it sinks, the canisters will be confined inside and will not affect the environment.

Fuel assemblies are delivered in batches to Clab about twice a week. Clab workers have much more work after Oskarshamn NPP units 1 and 2 closed in 2017. Nevertheless, it should be noted that spent nuclear fuel is transported from the Oskarshamn NPP to the Clab Interim Storage Facility by vehicle, not by ship. This is because the plant is not far from the storage facility.

Spent nuclear fuel is stored under water for 30-40 years in spent fuel pools whose size is equal to a football field.

The temperature of the spent nuclear fuel drops from few hundreds of 0C when it arrives to Clab to about 90 ˚С after 30-40 years storage at the Clab. The activity remains quite high, about 1 Gray per hour on the surface of a copper canister.

6,500 tons of spent nuclear fuel is stored at Clab today. The total storage capacity is 11,000 tons, and the license was granted for 8,000 tons. The spent fuel amount in the storage facility increases every day. Clab employees hope that a geological repository will be commissioned in time. Otherwise, the Clab storage facility will have to be extended. The Äspö Hard Rock Laboratory is located near the Clab Central Interim Storage Facility for Spent Nuclear Fuel. In general, the Laboratory is an experimental prototype for a future geological repository. It was constructed to examine as much as possible all processes that would occur with spent nuclear fuel in geological formations.

The Äspö Hard Rock Laboratory is almost 500 meters underground. The rock is called Äspö granite and is 1.8 billion years old. The laboratory tunnel was driven by explosions and drilling. The latter technology was used in Sweden for the first time.

Considerable attention in the Laboratory is paid to water ingress into the tunnel. 640 liters of water per minute is pumped to the surface by special pumps. It returns to the Baltic Sea after settling and decontamination.

This territory has never been considered for the construction of a geological repository in Sweden because of a large amount of water in the tunnel. It will be constructed near the city of Forsmark in rocks with much less water ingress.

It is notable that water in the Laboratory pumping station is curative and has a rejuvenating effect since it is a cocktail of ancient sources. There is water that is over 7000 years old and water of about 1.5 million years old. This water disappeared from the face of the earth and passed into rocks long time ago. Therefore, it is hardly possible to try it in a different place except for the Laboratory.

The Laboratory performs currently a range of different surveys. They include surveys for horizontal rather than vertical placement of canisters and for improvement of the drilling technique and retrieval of canisters.

To understand how the rock will be heated and whether copper canisters will be subjected to corrosion, six canisters were placed into the Laboratory tunnel in 2000. They were further poured into bentonite clay and sealed. This procedure was actually the same as would be used in a real geological repository in the disposal process. Two canisters were retrieved in 2011 to check if they were stored safely, and four canisters were left until 2023 for the purpose of an experiment. Nothing had happened to the two retrieved canisters for 10 years; they remained in the same condition as before the disposal, without any corrosion or damage.

Today, the Laboratory also analyzes how to seal the tunnel sections by bentonite clay. Clay will be laid by a robot in a future repository, which will place 8 meters of clay per day.

Äspö Hard Rock Laboratory staff pays much attention to public relations. More than 6,000 visitors are here annually. A 3.6 km race was arranged in one of the longest Laboratory tunnels in November 2017. The goal was to familiarize the public with a future geological repository. According to Inger Nordholm, SKB expert, the more people know about the facility, the less are they afraid of it.

The SFR Permanent Repository for Short-Lived Radioactive Waste is located between the city of Östhammar and the village of Forsmark. About 22,000 people live in Östhammar and 100 people reside in Forsmark.

The Forsmark NPP with three BWRs is located near SFR. The construction of a permanent repository for spent nuclear fuel is planned here, near Forsmark.

The SFR repository is situated in bedrocks at a depth of 50 meters below the Baltic Sea bottom. The repository is designed for about 60,000 m3 of waste. Only solid waste is stored here; it is transported from NPPs, industrial plants, research facilities and medical establishments.

NPPs send a list of waste to be transported to SFR in advance. When canisters arrive, repository staff check if they comply with the ones declared earlier. If everything is fine, the packages are removed from the canisters and placed into the repository according to their radiation level, and the canisters are shipped back to NPP.

A very little amount of waste comes from medical establishments, industrial plants and research facilities. They all have to pay for disposal of their waste in SFR.

SFR currently includes only operational waste. The repository does not have enough capacity for decommissioning waste. Therefore, SFR management decided to extend the repository. All necessary documents for a license have already been submitted. If the regulator’s response will be positive, SFR will be extended by 120,000 m3 in 2022-2028. The extended part will be operated until 2070, and then the repository will be closed and covered by bentonite clay.

As of today, 356 members of technical personnel support SFR operation.

Significant attention is paid to ensure compliance of the repository with safe operation conditions. All systems, groundwater movement, air circulation, presence of radon in rooms are under strict continuous control. The fire safety system is monitored with special vigilance: very strict requirements are established for the equipment and staff, different exercises and master classes are held on a regular basis.

740 million SEK was spent for SFR construction from 1983 to 1988. 10 to 30 million SEK had been spent annually to support SFR operation during 25 years since commissioning. The operational costs increased in 2010 and are now 40 to 60 million SEK.

The final SFR construction project has not been approved yet. According to preliminary calculations, the repository extension will cost about 1.5 billion SEK (over 147 million EUR).

All waste in the repository will become the property of Sweden after SFR closure in the 2070s.

After the introductory presentation on SFR, SKB expert Inger Nordholm conducted a tour for the Ukrainian delegation on the territory where a geological repository is to be constructed. Inger Nordholm expressed hope that a permit for repository construction will be obtained not later than 2020.

After that, the future of a geological repository will be decided by the Government of Sweden, whose competence is to issue an individual permit for construction.

The repository site selection process started more than 40 years ago and lasted very long. Eight potential sites were selected at that time. Rocks were examined at each site and negotiations with local public were conducted. As a result, two candidate sites for a repository remained: Forsmark and Oskarshamn. Forsmark was finally selected in June 2009. The KBS-3 technology based on three protective barriers, such as copper canisters, bentonite clay and bedrocks, will be used for disposal in Sweden.

After copper canisters are placed into an appropriate disposal section, the tunnel will be filled with bentonite clay. This clay will serve as a barrier to protect the canisters against corrosion and minor bedrock movements.

The last barrier consists only of granitic rocks. Their purpose is to isolate waste. They provide a stable chemical environment and protection against events at the soil level. However, bedrock contains underground water, which leaks through cracks in the rock. Even if radioactive substances release beyond a canister and penetrate through the clay layer, they will be trapped by minerals and microporous rock.

The bedrocks and their considerable depth will allow spent nuclear fuel to be isolated from the public and the environment for at least 100,000 years.

If everything will proceed according to the plan, the Government of Sweden will issue a permit for repository construction in 2020 and the first canisters will be disposed already in 2029. The repository will be operated further for 60 years and then will be permanently closed.

The Swedish Nuclear Waste Fund makes up currently about 60 billion SEK (over six billion EUR). The fund was established in the 1980s, the money is allocated to the fund for every kWh produced. The amount of allocations is revised every three years.

Retrieval of spent fuel canisters from the geological repository for further processing might be possible. Future generations will decide if it is needed. Sweden has provided technical capabilities for this purpose.