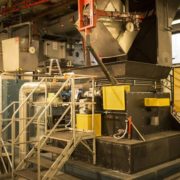 We visited Cyclife during the press tour devoted to the radioactive material management facilities in Sweden. Previously, these territories belonged to the Studsvik SB Swedish Company. In 2016, EDF Corporation purchased them and established a Cyclife division in Sweden.

Currently, EDF is the largest group of NPP operators in the world. The EDF staff is 154,000 people and the annual profit is 71,2 billion euros. The Company has more than 37 million clients worldwide.

The Cyclife division was founded in 2016. Radioactive waste management facilities of Cyclife are operated in France, Sweden and Great Britain. There are various types of processing at facilities: melting, incineration, metal processing, pyrolysis. The facilities in France and Great Britain process exclusively their own waste. Radioactive waste from nuclear power plants around the world is accepted in Sweden for processing, and so is waste from research reactors and medical establishments of Sweden.

The following facilities are under operation at Cyclife in Sweden: metal processing and melting facilities with a current capacity of 5,000 tons a year and a pyrolysis facility. Incineration has the following advantages: waste volume reduces by 97% and received heat can be used for heating the population.

After processing, radioactive waste from NPPs is returned to the country where it was generated. The processed radioactive waste of research reactors and medical institutions of Sweden becomes Cyclife property.

There is Svafo Company at Cyclife dealing with the management of historical waste of Sweden, which is financed by Swedish NPPs. Approximately three to four times a week, Svafo sets off to search for orphan waste, including radiation sources. There are also departures upon request, when a person or enterprise informs on suspicious findings.

The Cyclife activities are clearly regulated by the Swedish Radiation Safety Authority (SSM). The Cyclife dosimetrists quarterly conduct radiological surveys of the environment to make sure that there are no radioactive releases around the site. Mushrooms, fish from water reservoirs and milk are checked for radionuclides.

The locals are tolerant to the processing of radioactive waste from other countries at Cyclife. This is due to several factors: availability of jobs and high level of public confidence in the government and the nuclear regulator (SSM).