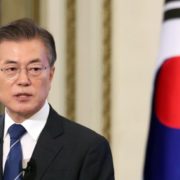 Moon Jae-in, Leader of South Korea, said that North Korea does not make any conditions for denuclearization. Seoul hopes for establishment of peace with Pyongyang. South Korea confirmed its readiness for denuclearization of Korean Peninsula without preconditions. Moon Jae-in, President of South Korea, has also confirmed this on April 19, 2018. Moon Jae-in and Kim Jong Un, Leader of North Korea, shall meet on April 27, 2018. As mentions the Deutsche Welle (German Press Agency), the President of South Korea made a great emphasis on that there is no more a question of the ultimatum of withdrawal of American troops from the region.

Mr. Moon’s announcement came just days before a scheduled meeting of Kim Jong Un with Donald Trump, USA President. The last threatened to Pyongyang with “maximal pressure” due to nuclear tension at Korean Peninsula. In his turn, the President of the South Korea optimistically evaluated the denuclearization perspective, in other words, nuclear dismantling of Korean Peninsula and establishment of peace between two Koreas.

The meeting of Mr. Trump and Mr. Kim in May can become a turning point in the conflict developed with regard to the Nuclear Program of North Korea. Last year, the leaders of two countries exchanged threats and counter threats of war, grievances and public scorns with regard to Pyongyang’s missile tests. This made the world to be preoccupied as for the flare of the conflict into a military confrontation.