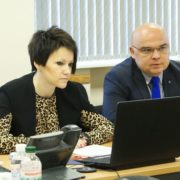 On 24-26 April 2018, the delegation of Norwegian Radiation Protection Authority visited SSTC NRS. The experts of Norwegian Regulator visited our capital to discuss the ways of further bilateral cooperation with the national Nuclear Regulator.

Mrs. Ganna Goraschenkova, Head of the SNRIU Division on International Cooperation and European Integration, opened the working meeting and welcomed the Norwegian colleges. She thanked to NRPA representatives for effective cooperation in the past and expressed the hope as for that future joint projects shall be as much successful and productive as previously implemented projects.

“We are very glad that our cooperation with the SNRIU and Regulator`s technical support organization lasts for more than four years, as a result of which six projects have been successfully implemented”, said Mr. Malgorzata Sneve, NRPA expert. – “Today, I would like to present to meeting participants published NRPA report that contains detailed reassessment of threats in the field of nuclear and radiation safety regulation in Ukraine”. According to the representative of the Norwegian Regulator, NRPA experts have familiarized with the most problematic issues in the field of nuclear and radiation safety regulation in Ukraine in the process of report preparation for publication. “Now it’s much easier for us to outline the priority areas of further cooperation”, said Malgorzata Sneve. In addition, she added that the report on the reassessment of threats shall contribute not only to more effective cooperation between the SNRIU and NRPA, but also to the establishment of cooperation between Ukrainian Nuclear Regulator and other international organizations.

As a result of the working meetings, the SNRIU and NRPA should, within three days, decide on a list of those projects that shall form the basis of the roadmap for cooperation between the Norwegian and Ukrainian Regulators in future. The SNRIU and its TSO experts shall submit twelve project proposals to the Norwegians for consideration. In the photo: Mrs. Ganna Goraschenkova, Head of the SNRIU Division on International Cooperation and European Integration (on the left) and Mr. Oleksandr Pecherytsia, First Deputy Director of the State Scientific and Technical Center for Nuclear and Radiation Safety (on the right)

“I believe that the implementation of projects in the framework of cooperation between the SNRIU and NRPA shall significantly contribute to the improvement of the nuclear and radiation safety system of Ukraine. It is very important and urgent to our country. So, once again, we want to express our gratitude to our colleagues from Norway for the support”, – summarized Mrs. Ganna Goraschenkova.

Chornobyl Accident through the Eyes of Swedish Expert. Flashback
Scroll to top