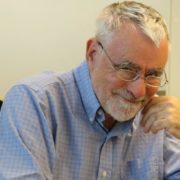 “It is now known that the first traces of the radioactive cloud was picked up in Sweden as early as Sunday (27 Apr. – ed.) that led to confusion and that Moscow made its announcement 24 hours later…” – this was how British ITN (Independent Television News) started the reportage about the then unknown Chornobyl accident in April 1986. Mikael Jensen, an expert who was asked by ITN to comment on the situation with radionuclides registered in the air of Sweden, then said that an undoubtedly serious accident occurred inside the reactor.

We met with Mikael Jensen in Stockholm during an information visit to the Swedish Radiation Safety Authority (SSM). Today he is a consultant to SSM and has been addressing the issues of high-level waste management for the last 20 years.

You may read an exclusive interview given specifically for Uatom.org to learn what he remembers about April 1986 and what was the reaction of Swedish authorities and society. – Mikael, what do you remember about April 1986? Were Swedes the first to reveal a radiation hazard over Europe? How it happened?

– Yes, among Western European countries, Sweden with Finland indeed was the first. We noticed radiation at the Studsvik and Forsmark sites. Moreover, radiation was detected at these plants independently of each other.

– Some personnel could not leave the plant, as they could not pass the building’s radionuclide control system because it alarmed on radiation contamination of these people. After that, urgent evacuation started: personnel thought something terrible happened at the Forsmark NPP. At the same time, Studswick NPP personnel thought that something had happened at their NPP. When we received the information from both plants and performed measurements, we realized that there was a serious accident at one of the Soviet Union’s NPPs.

– In a few days, Moscow reported that the accident occurred on the USSR territory, in Ukraine. Sweden started a number of radiological surveys.

– What radionuclides were identified?

– Did Sweden take measures to prevent radiation intake by the human body?

– No. Unfortunately, there was no time for preventive measures, it was already too late. The radioactive cloud was already over Sweden and the problems came with the first rain. The northern territories suffered most: from Uppsala to Sundsvall. Gamma radiation measurements performed at that time at the Uppsala University showed that the natural radiation background was exceeded by approximately 100 times.

Population on the northern Sweden territories faced many problems. This area was famous for hunting and fishing, served as a recreational area and attracted tourists. After the Chornobyl accident, everything was destroyed in some areas, people stopped eating meat from animals or fish.

Since the summer was close, people had many questions about what to do with the gifts of nature. Could they consume milk, fish, berries, mushrooms? There were problems. In part, they still remain. In some places of the region, it is prohibited to sell mushrooms. We still register radiation contamination on this territory.

– How do you monitor this?

– In general we (nuclear regulator – ed.) give advice to municipalities and it is their duty to measure contamination of mushrooms, meat and fish. Chanterelles are among the most expensive mushrooms. They cost 20 euros per kilogram. One way or another, we cannot prohibit people to eat mushrooms, so we have prohibited selling them in certain areas.

– What was the reaction of ordinary citizens to the Chornobyl accident? How did top officials respond?

– As for the public, the problem was rather psychological. People felt like they could hardly breathe outdoors. There were a lot of questions, but initially very few answers…

Turning to the history, we see that after the Three Mile Island accident (USA) in 1979, a referendum was conducted in Sweden, where the citizens of Sweden decided to continue the use of nuclear power only until 2010. After the Chornobyl accident, there was even a joint declaration of several political parties in Sweden, which specified the same thing: development of nuclear power should be terminated in 2010. Nevertheless, as reality showed, this did not happen.

Discussions on the feasibility of nuclear power development in Sweden are still underway. After the Chornobyl and Fukushima accidents, they became more active, but fell with time. Today, the Government of Sweden is more focused on the management of radioactive materials.

– What are your plans? May Sweden take the choice of Germany and adopt a program for gradual nuclear phaseout?

– The previous Government had attempts to construct a new reactor at the Ringhals site. It was a few years ago. Nevertheless, when the new Government came to power in 2014, the process was terminated. It is unknown what decisions will be made by the new Government. We have new elections 2018.

– What would you recommend to countries that continue to use nuclear power to avoid situations like those in Japan, the United States, and the former Soviet Union?

–   The European Union originally planned to regulate nuclear safety more thoroughly and establish a special regulator in Brussels. The existing regulators of EU member states were against this idea. Instead, they formed the Western European Nuclear Regulators Association (WENRA), which also included regulators from new EU countries. A common view for safety was established. The Association has been very active for the last 10 years.

Anyhow, as long as we have nuclear power, it has to be safe. Gratitude to Liquidators of Chornobyl Accident
Scroll to top