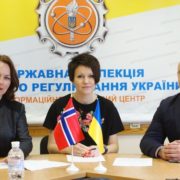 On 24-26 April 2018, the delegation of the Norwegian Radiation Protection Authority visited SSTC NRS. The priorities for cooperation of the both Regulators were specified in the framework of working meetings.

“First, we presented to our Norwegian colleges the results of implementation of six on-going projects in the framework of cooperation. After what we submitted twelve project proposals that relate to different activities to continue further cooperation”, tells Mrs. Ganna Goraschenkova, Head of the SNRIU Division on International Cooperation and European Integration.

According to Mrs. Goraschenkova, from these twelve project proposals, submitted to NRPA by the SNRIU and its TSO experts, six most priority proposals shall be selected at the earliest possible time. The start of project implementation is planned towards the end of the year on condition of allocation of funds. In photo: (from the left to the right) Mrs. Malgorzata Sneve, the representative of Norwegian Radiation Protection Authority; Mrs. Ganna Goraschenkova, Head of the SNRIU Division on International Cooperation and European Integration; Mr. Oleksandr Pecherytsia, First Deputy Director of the State Scientific and Technical Center for Nuclear and Radiation Safety

Also, the signature of the Protocol on practical interaction of emergency preparedness departments of the SNRIU and NRPA was also discussed in the framework of the meeting.

Also, the question of joining of Ukraine to the Europe and Central Asia Safety Network that is functioning under IAEA auspices, was discussed. Currently, the Norwegian Radiation Protection Authority heads the network.

“Actually, the NRPA representatives proposed us to join up”, concludes Mrs. Goraschenkova. “In the nearest future, the SNRIU shall consider such an opportunity and shall officially inform the representatives of Norwegian Nuclear Regulator on the SNRIU final decision”.

Gratitude to Liquidators of Chornobyl Accident

President: This year the commissioning of a new safe confinement will be co...
Scroll to top