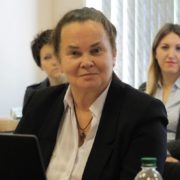 On 26 April 2018, in the framework of the Emergency Preparedness and Response Enhancement Project implemented in cooperation with SNRIU and the Norwegian Radiation Protection Authority (NRPA), the State Nuclear Regulatory Inspectorate conducted a workshop where the results of assessing compliance of the current Radiation Emergency Response Plan in force at the state level with IAEA safety standards were discussed in the professional environment.

Representatives of SNRIU, SSTC NRS, Ministry of Energy and Coal Industry, Ministry of Health (MOH), Energoatom Company, State Agency of Ukraine on Exclusion Zone Management (SEZA), Radiation Protection Institute of the Academy of Technological Sciences of Ukraine, and NRPA participated in the workshop.

Tetiana Kutuzova, Head of the Emergency Preparedness and Radiation Protection Division, SNRIU Directorate of Nuclear Facilities Safety told about the issues discussed during the workshop. – Tetiana, why the emergency response plan in force in Ukraine is revised?

– In the field of nuclear energy, emergency response plans and procedures should be kept up-to-date by checking their efficiency during training taking into account legislative and structural changes, assessing the risks of hazardous events, as well as international experience on response to the situation with radiation contamination spread in a transboundary context. National level plans should also be updated in accordance with the recommendations of international organizations such as IAEA and the International Commission on Radiation Protection.

In the process of administrative reforms in Ukraine, there are significant changes in the structure of central executive authorities, which according to the law have responsibilities to participate in response to emergency with the threat of radiation impact or consequences. Due to redistribution of functions and subordination, powers delegated to newly formed services are not always supported by appropriate resources, procedures and competent personnel in a timely manner.

At the same time, in accordance with para. 14 of the current Evacuation Procedure in case of emergency or emergency threat approved by the decision of the Cabinet of Ministers of Ukraine No. 841 of 30 October 2013 “the decision on evacuation of the public from the radioactive contamination zone shall be made by the Council of Ministers of the Autonomous Republic of Crimea and local state administrations based on the conclusion of the health and epidemiological service in accordance with the predicted dose load on the public or information on operational events from economic entities operating nuclear facilities”.

It means that today the only source of information for local state administrations to make a decision on evacuation of the public in case of radioactive contamination is still licensees.

Therefore, SNRIU pays more attention to the state of emergency preparedness primarily of nuclear entities by improving licensing and oversight procedures, consistent regulatory assessment of training. It also works on establishing and maintaining reliable communication with governmental, departmental, scientific and expert organizations having responsibilities, experience, potential and competence in case of the need for prompt response to nuclear and radiation incidents.

The purpose of the workshop held on the memory day of the Chernobyl tragedy was to establish sustainable interagency communication on emergency preparedness and response in everyday activities in order to be sure that the preparedness system is reliable and may be applied even in case of unlikely events.

As of today, Ukrainian experts have performed a self-assessment of compliance of the current national plan with new IAEA publications, as well as with the provisions of Council Directive 2013/59 Euratom, which sets the basic safety requirements for radiation protection; and WENRA reference levels. The Norwegian colleagues made comments and proposals on the assessment results and shared their experience on implementing new IAEA safety standards in Norway. At the same time, they highlighted that the basis of modern emergency response systems of European countries is a sad experience of the Chornobyl tragedy, when almost all countries of Europe were under the impact of radioactive release. Thus, within interagency cooperation and under the NRPA’s advisory support, we have started the work on the draft of a new updated national plan for response to nuclear and radiation accidents that should meet current vision of radiation biological effects and be harmonized with IAEA safety requirements, nuclear incident response procedures at the international level.

– Let’s try to identify the most significant gaps in the emergency preparedness and response system in Ukraine.

– Emergency preparedness systems of such licensees as Energoatom, ChNPP, specialized enterprises for radioactive waste management of USC Radon and others are under SNRIU strict regulatory control. All of them are operated, checked and verified during training, including international ones.

However, you may find areas that need to be improved in any response system. Thus, when discussing the self-assessment results, several such issues were identified, in particular uncertainty of medical organizations when there is the need to respond to radiological damage. The country that survived the Chernobyl accident, the country operating 15 NPP units, decommissioning ChNPP units, transforming the Shelter into an environmentally safe system, having radioactive waste management facilities, uranium mines and research nuclear facilities should provide a sufficient number of specialized medical institutions provided with appropriate equipment, pharmaceuticals and specialized personnel in case of nuclear and radiation incidents. We will send an appropriate request to the Ministry of Health to specify clearly these organizations in the plan and maintain their potential at proper level.

The second identified issue, which also requires interagency cooperation, is establishing a single state radiation monitoring system. In 2012, the Cabinet of Ministers of Ukraine adopted an action plan for establishing such a system, the Ministry of Emergencies of Ukraine had to manage the process. However, the Ministry was liquidated; its functions were transferred to SESU. Ukrainian Hydrometeorological Center of Ukraine is subordinated to SESU.

The third identified issue is the need for coordinated communication between different agencies and organizations if there is a risk of accident consequences spread beyond the licensee’s site.

In addition, a nuclear incident may happen in any country of the world where our citizens work or stay. During our participation in the IAEA international training last year, we jointly with the Ministry of Foreign Affairs exercised timely notification procedures to respond to incidents that may occur outside Ukraine but have radiation impact on its territory. Therefore, this gap should be removed urgently.

–Is there transport in Ukraine to evacuate people if necessary?

– This question is checked during training provided by SESU and conducted in all territorial subsystems of the Unified State Civil Protection System. Detailed information on the training held on 24-25 April in Khmelnitsky may be found using the link.

Joint training of SUNPP and Mykolaiiv Regional State Administration is planned for 23-24 May. During this training, the SNRIU Information and Emergency Center, Energoatom and SESU Main Department in the Mykolaiiv region will also be activated. We usually inform on such events on the official website. During the training, all procedures envisaged in emergency plans of NPPs and territorial subsystems will be practiced. I think that communication, interaction, trust and mutual assistance between response participants should be established and maintained in everyday activities at local, regional, national and international levels. Regarding these issues, we also work with public organizations and appreciate that experts who indeed know how it is difficult to overcome accident consequences are still with us.

President: This year the commissioning of a new safe confinement will be co...