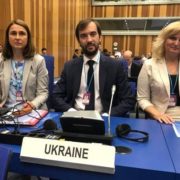 Ukrainian delegation started its work in the sixth Review Meeting of the Joint Convention on the Safety of Spent Fuel Management and on the Safety of Radioactive Waste Management, which is being held from 21 May 2018 to 01 June 2018 in the IAEA premises in Vienna (Austria). The delegation headed by the Chairman of the State Nuclear Regulatory Inspectorate of Ukraine included representatives of the Ministry of Energy and Coal Industry of Ukraine, State Agency for the Exclusion Zone Management, the Permanent Mission of Ukraine to Vienna, NAEK “Energoatom”, Chornobyl NPP, “UkrDO” Radon “and SSTC NRS.

During the Sixth Meeting, a presentation of the National Report of Ukraine will be made, which will include the summary information on due implementation by Ukraine of obligations under the Joint Convention for the 3-year period following the Fifth Review Meeting. The progress in implementation of measures ensuring appropriate level of nuclear and radiation safety under spent nuclear fuel and radioactive waste management, as required by the Joint Convention, will also be presented.

The review results of the Contracting Parties’ reports will be presented at plenary meetings and included in the Sixth Meeting deliverables.

Regional Workshop on Communication in Nuclear and Radiation Safety was Comp...