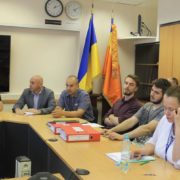 From 23 to 24 May 2018, the general NPP exercise according to the scenario with several conditional events development in real time mode was carried out at South Ukrainian NPP (SU NPP).

The event occurred on 23 May 2018 at 10:05, due to tornado and damage of external power supply grids, all three SU NPP power units were disconnected.

The safety systems were actuated in regular mode at SU NPP units 1 and 2. Resulting from the fire at diesel generators, the emergency power supply was lost at unit 3. The NPP staff started managing the emergency in accordance with the instructions and actions in extreme conditions.

At 11:20, unit 3 radiation monitoring systems registered a sharp change of the radiation background.

At 11:31, the NPP management classified the event as a “General Accident”, what means that its consequences extend beyond the NPP site and require implementation of measures on the population and territories protection.

An Emergency Plan was deployed at NPP and the NPP Crisis Center was activated. Practically at the same time, the NAEK ”Energoatom” Crisis Center and the SNRIU Information and Crisis Center were also activated. The information exchange for coordination of actions with the State Service of Ukraine for Emergencies (SSUE) and other emergency response participants in the area of the NPP was ensured. Owing to the coordinated and qualified actions of the NPP personnel, the release of radioactive materials at SU NPP unit 3 was stopped at 11:55.

Also, the measures on the NPP personnel protection have been implemented, such as: evacuation of workers not involved in the accident liquidation; iodine prophylaxis; disconnection of the NPP ventilation systems; limitation of outdoor stay; use of personal protective equipment (respirators).

Due to increase of radiation background in the settlements Yuzhnoukrayinsk, Bogdanivka and Kostyantynivka, it was also recommended to implement protective measures for the population, and namely: to restrict outdoor activities, to carry out iodine prophylaxis, to seal the premises, to use respirators, to restrict use of local food and water from open water reservoirs.

At 16:00, the SU NPP experts reported that the situation on the site stabilized – operation of SU NPP unit 3 diesel generators was restored. Activities on elimination of the consequences of the accident continued: the NAEK “Energoatom” Emergency and Technical Center helicopter was used for radiation background assessment at the NPP adjoining territory. Other NPPs also confirmed their readiness to provide assistance to SU NPP as soon as possible.

The SNRIU Information and Crisis Center jointly with the Ukrainian Hydrometeorological Center SSUE using the RODOS system have received atmospheric transport models based on real weather forecasts for both the territory of Ukraine and neighboring countries. The conditional release did not cause transboundary impact. However, the SNRIU experts, in accordance with the procedures of the Convention on the Early Warning of a Nuclear Accident, sent a number of informational messages to the competent authorities of Hungary, Poland, Latvia and Norway. All of these countries, in accordance with bilateral agreements, partially participate in such exercises with the objective to test the reliability of communication and follow development of events.

According to modeling data and expert recommendations, the consequences of such an emergency require additional research. First, it goes about checking the content of radionuclides in local foodstuff within the NPP surveillance area and in the regional nature gifts. In this regard, the population was recommended to adhere to recommendations of the regional bodies of the State Committee for Consumer Safety on peculiarities of using food and drinking water. According to estimations of inspectors and observers, the main goal of the training was achieved. Verification of the effectiveness of procedures for all sections of the NPP Emergency Plan in conditions of several risk factors (natural, fire, radiation) was performed, and areas for improvement were identified. One of these is the improvement of information exchange applying up-to-date technologies. “This year, the training scenario was rather complicated. Experts of other NPPs followed the events at SU NPP and the SNRIU Crisis Headquarters, which, I believe, is a very good practice for the operator. There are no real actions involving NPP equipment and systems during the exercise. The procedures and ability of people to respond in stress, limited time and information conditions are checked. Moreover, all that was carried out under the meticulous views of inspectors and observers“, – says Tetyana Kutuzova, the Head of the Department of Emergency Preparedness and Radiation Protection, State Inspector of the SNRIU Directorate on Nuclear Facilities Safety. – “In our opinion, this year the SU NPP staff demonstrated high professionalism and ability to respond to extreme events at the appropriate level”.

Radwaste Treatment Plant to Be Put into Commercial Operation at ZNPP by End...
Scroll to top