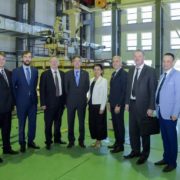 The regular meeting of the operational headquarters to discuss the implementation of upgraded Westinghouse nuclear fuel (FA-WR) at Ukrainian NPPs took place at Zaporizhzhya NPP. Westinghouse Electric (Asia) S.A. representatives headed by José Emeterio Gutiérrez, President and Executive Director, representatives of the State Nuclear Regulatory Inspectorate of Ukraine, Ministry of Energy and Coal Industry of Ukraine, Energoatom, State Scientific and Technical Center for Nuclear and Radiation Safety (SSTC NRS) and Verkhovna Rada of Ukraine participated in the activities of the operational headquarters.

Having opened the meeting, Energoatom President Yuriy Nedashkovsky stressed the importance of the event arranged to solve strategic tasks of the Company and of nuclear energy of Ukraine.

“The representative delegation headed by executive staff of the Westinghouse Company, SNRIU, SSTC NRS and Ministry of Energy and Coal Industry gathered today at the Zaporizhzhya NPP industrial site to discuss the issues related to the implementation of Westinghouse upgraded nuclear fuel at Ukrainian NPPs. The main summary of the operational headquarters is that the activities are performed according to the schedule. All the issues outlined by the previous decisions of the headquarters and the Westinghouse fuel implementation program are solved according to the operating procedure. It is pleasant to note the cooperation progress between Energoatom and Westinghouse in both nuclear fuel supply diversification and implementation of NPP safety improvement program”, Yuriy Nedashkovsky underlined.

Westinghouse Electric Company President, José Emeterio Gutiérrez, thanked Yuriy Nedashkovsky for visiting Zaporizhzhya NPP. “Westinghouse Company and Ukraine started their cooperation over 20 years ago. We worked hard to achieve successful cooperation and were very interested in the success of Energoatom, since Westinghouse’s success depends on it. In due course, Ukraine adopted a strategic decision to diversify nuclear fuel supply. It only opened new opportunities for our company; it is also an honor for us to supply fuel for the operator of Ukrainian nuclear power plants. Westinghouse will make every effort to ensure that the products and services we provide to Energoatom are always at the highest level”, José Emeterio Gutiérrez emphasized.

Svitlana Kulchytska, Deputy Director of the Department of Nuclear Energy and Atomic Industry Complex of the Ministry of Energy and Coal Industry of Ukraine, noted fruitful efforts of the operational headquarters and underlined that the nuclear fuel diversification project for Ukrainian NPPs is extremely important and promising.

The Chairman of the State Nuclear Regulatory Inspectorate of Ukraine Hryhorii Plachkov noted effective work of Energoatom in extending the cooperation with the Westinghouse Company. “Resulting from the activities in 2015-2017, we do not have any questions on the use of Westinghouse fuel and licensing of fuel in trial operation. Having observed the activities of SSTC NRS and SNRIU experts, we are optimistic about the diversification process”, he stressed.

It should be recalled that the project on energy safety improvement in Ukraine through nuclear fuel supply diversification should be considered a successful project implemented at Zaporizhzhya NPP in 2018.

In September-October 2017, Westinghouse nuclear fuel was also loaded into the cores of power units 1, 3, and 4 at Zaporizhzhya NPP and these power units were transferred to the mixed core: three-quarter Russian fuel and one-quarter American fuel.

It is assumed that the cores of units 1, 3, 4 and 5 at Zaporizhzhya NPP will be fully loaded with American nuclear fuel in 2019-2021. ZNPP units 2 and 6 are planned to be operated further using only Russian nuclear fuel.