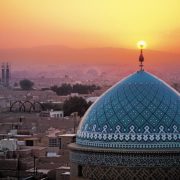 Iran intends to increase uranium enrichment, Deputy Head of the Atomic Energy Organization of Iran Behruz Kamalwandi said. This is reported by DW.

It is noted that relevant letter will be transferred to the International Atomic Energy Agency (IAEA) on Tuesday, 5 June. Iran is also able to accelerate production of centrifuges needed for enrichment.

The previous day, Supreme Leader of Iran Ayatollah Ali Khamenei, during a televised speech, said that Iran would not restrict its missile program. According to him, Tehran has no intention “to tolerate sanctions and restrictions in the nuclear sphere simultaneously”. Khamenei also announced preparation to increase uranium enrichment within the Joint Comprehensive Plan of Action.

In early May, President Donald Trump announced U.S. withdrawal from the agreement made between Iran and the United States, Russia, China, Britain, France and Germany in 2015. The agreement envisaged a series of steps by Iran to limit its nuclear program in exchange for cancellation of sanctions. Trump accused Iran of supporting terrorism and desire to continue developing nuclear weapons. After the withdrawal, the U.S. extended sanctions against Iran. These sanctions may affect and non-U.S companies that do business in Iran.

The rest of agreement parties criticized the Trump’s decision and announced their intention to keep the agreement in force. At the same time, the Iranian Foreign Ministry reported that the European countries had a period from 45 to 60 days to provide safeguards for protecting the Iran’s interests and compensating for losses resulting from the U.S. withdrawal from the agreement. If the European parties do not do so, Iran will warn of adopting “compulsory decisions”.

Presidents of Energoatom and Westinghouse discussed the progress of implemenation...

Project for Training Experts on Physical Protection, Accounting and Control...
Scroll to top