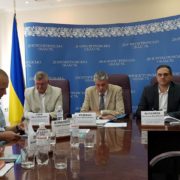 On 31 May, a joint meeting involving participants of project “Public Outreach on the Amnesty Program of Orphan Radiation Sources” and representatives of local authorities was held in Dnipro. It was chaired by Deputy Head of the Dnipropetrovsk Regional State Administration Oleg Kuzhman. The meeting was devoted to discussion of the main project stages, development of practical steps that will promote its more efficient implementation and establishment of qualitative horizontal links between all parties involved.

“Dnipro is located only 200 km from the region where active military operations are being conducted”, Mr. Kuzhman opened the meeting. “Therefore, for us the issues of public protection, radiation safety, safety of radioactive waste management are extremely important and relevant. In addition, the Dnipropetrovsk region is one of the largest industrial regions, and therefore the likelihood of revealing unaccounted radiation sources increases.

The project started in May 2017 under financial support of the US Government. It is a part of a global program aimed at nuclear weapons non-proliferation and elimination of nuclear threats. Project purpose is to inform the public on the management of radiation sources, establish a clear interaction between the public and government bodies responsible for response to unaccounted radiation sources.

The beneficiary of the project is the State Agency on Exclusion Zone Management, and its main contractor is the Chornobyl Research and Development Institute (ChRDI).

“We have high expectations for this project”, member of the supervisory board of the Chernobyl Institute for Research and Development Vitalii Demianiuk commented. “Its successful implementation will promote developing a culture of radiation source management and improving radiation safety level in Ukraine. Our team is making all efforts to make the pilot project in the Dnipropetrovsk region a better example and the experience gained to be extended to other regions of the country”.

The Dnipropetrovsk region was selected a pilot site for project implementation since there is the highest concentration of radiation sources: there are 1025 sources, which are used at 50 enterprises. At least 100 of them are considered potentially lost.

The participants of the meeting in Dnipro separately paid attention to the need to amend current regulatory framework on the procedure for interaction of government bodies in case of revealing and voluntary surrender of radiation sources. The State Scientific and Technical Center for Nuclear and Radiation Safety as the main subcontractor for the project is currently conducting an analysis of regulatory documents regarding management of radioactive materials, including radiation sources and preparing relevant recommendations to improve them.

It is also necessary to note an active position of representatives of regional authorities, who independently settle the issues on the management of hazardous substances, including hazardous materials. They showed preparedness for cooperation and expressed their gratitude for support in such an important issue.

In compliance with meeting results, it was also agreed to sign a Memorandum of Cooperation between the Dnipropetrovsk Regional State Administration and ChRDI.

“The Memorandum of Cooperation will contribute to closer and more coherent work between our Institute and the Dnipropetrovsk Regional State Administration. I am sure that in the future our cooperation with representatives of the municipal government will be fruitful and will allow raising radiation safety level in the region”, Mr. Demianiuk summed up.

Workshop on State Registration of Radiation Sources and Operation of Register...