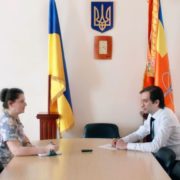 The Sixth Review Meeting under the Joint Convention on the Safety of Spent Fuel Management and on the Safety of Radioactive Waste Management was held in Vienna, the capital of Austria, from 21 May to 1 June 2018. The Ukrainian delegation presented the National Report on the fulfilment of obligations by Ukraine under the Joint Convention on 23 May. The Chairman of the State Nuclear Regulatory Inspectorate of Ukraine and head of the Ukrainian delegation in Vienna, Hryhorii Plachkov, reported on this event. – Mr. Plachkov, who presented the National Report of Ukraine in Vienna? What main messages were addressed to the international community during the presentation?

– I presented one part of the Report as the head of the Ukrainian delegation, and Natalia Rybalka, deputy head of the delegation and head of safe radioactive waste management department, presented the other part.

The background is as follows: the National Report of Ukraine was developed according to the established procedure by SNRIU with involvement of experts from a number of national industry organizations. In October 2017, it was posted on a special closed page of the IAEA for preliminary review by the contracting parties to the Joint Convention.

Upon the review, the contracting parties sent 82 questions for Ukraine. All the questions were answered in detail and posted on the Joint Convention website.

The presentation of Ukraine contained summary information on appropriate implementation of the obligations under the Joint Convention for the three-year period after the Fifth Meeting. The presentation deals with the progress in measures implemented to provide appropriate nuclear and radiation safety in spent fuel and radwaste management.

– What positive shifts in radwaste and spent fuel management were implemented in Ukraine during the last three years?

Ukraine achieved progress in implementing the key project of the Shelter Implementation Plan. Actually, we are talking about the NSC construction in the Chornobyl exclusion zone.

– Well, let’s address these aspects one at a time. Indeed, Ukraine has made progress over the last three years in the NSC construction in the Chornobyl exclusion zone. When is the facility going to be commissioned?

– According to ChNPP, NSC completion is expected by the end of 2018.

– When is ISF-2 going to be commissioned and what actually happens now at the site of the centralized SFSF?

– Individual and comprehensive tests of the systems and components important to safety are ongoing at the ISF-2 site. According to ChNPP, the tentative beginning of hot tests is planned for the fourth quarter of 2018.

Stage 1 of the centralized SFSF construction was completed in early May, namely: a fence, checkpoints, service roads, sewage and drainage systems, water tanks, and lighting and power supply system were provided.

Six kilometers of railway that will connect the storage facility with the existing railway infrastructure in the exclusion zone is currently under construction. These activities will allow the beginning of the main construction stage of administrative buildings and the site where spent fuel containers will be placed.

– Safety reassessment of two radioactive waste disposal sites (RWDS) was performed under international projects in the Chornobyl exclusion zone, namely: Pidlisny RWDS and ChNPP Stage III RDWS. Based on the reassessment, both sites are safe for radwaste storage. At the same time, it is necessary to continue enhanced institutional control, especially as regards aging management and constant monitoring of the sites.

The radioactive waste interim confinement sites (RICS) were also subjected to inspection to determine the location of trenches and pits; RICS were subjected to safety reassessment to optimize their further remediation.

According to the safety reassessment, all RICS pose risk and require some measures to decrease threat for the public, personnel and the environment. Institutional control for about 500 years within the 10-km zone is sufficient for most RICS. However, the retrieval of radioactive waste from trenches and pits of some RICS is quite justified in view of safety.

Radwaste retrieval from the most hazardous RICS trenches and pits is currently ongoing.

– How has the management system for spent radiation sources been improved in Ukraine?

– The centralized long-term storage facility for disused radiation sources (CLTSF) was constructed on the Vektor site with support of the Department of Energy and Climate Change of the United Kingdom of Great Britain and Northern Ireland from 2012 to 2015. Additional funding was also received from EU countries, as the project was implemented under the Global Partnership against the Spread of Weapons and Materials of Mass Destruction.

CLTSF is the main component in improving the whole management system for disused radiation sources in Ukraine. The facility was designed for acceptance, identification, sorting, treatment, packing, repackaging, certification and storage of disused sealed alpha, beta, gamma, and neutron radiation sources for 50 years.

– When is CLTSF going to be commissioned?

– Comprehensive cold tests of the main systems important to CLTSF safety were performed in 2015.

Comprehensive hot tests are still ongoing at the facility. In the course of these tests, the CLTSF operator (Centralized Radioactive Waste Management Enterprise (CRME)) has to confirm protective properties of the facility and verify processes for treatment of disused radiation sources and operating procedures and instructions.

Unfortunately, a number of drawbacks in the CLTSF design were revealed during the hot tests.

– What questions were asked by representatives of other contracting countries after the National Report of Ukraine was presented?

– We were asked about the progress in the construction of the centralized SFSF in the Chornobyl exclusion zone, the number of inspections at Radon Corporation, as well as management of disused radiation sources and plans for their further disposal.

The contracting parties were also interested in Ukraine’s position on the construction of a national geological repository, comprehensive assessment of facilities in the exclusion zone and plans for further use of these territories.

Questions were also asked whether the infrastructure in Ukraine was ready to accept radwaste for storage after spent fuel reprocessing in the Russian Federation.

– Ukraine successively implements its obligations under the Joint Convention.

– What are the main challenges for Ukraine related to spent fuel and radwaste management as of today?

– First of all, it is the construction of spent fuel and radwaste management facilities in the Chornobyl exclusion zone and at ChNPP site. It is about the construction and commissioning of the centralized SFSF, construction and further operation of the long-term storage facility for vitrified radioactive waste that will be returned after spent fuel reprocessing from the Russian Federation. No less significant challenges are the design and construction of the radwaste treatment plant at the Vektor site, as well as other ChNPP radwaste management facilities.

In addition, legislative consolidation of the special status for an industrial area in the exclusion zone still remains important. It is required to ensure that these territories can be used more efficiently in future and that the next generations will feel safe.

Another challenge is to activate the construction of a geological repository in Ukraine. It is necessary to define the operator, develop an action program for repository, and start its siting.

– What tasks were set for Ukraine for the next three-year period?

– The contracting parties supported Ukraine in focusing the efforts to deal with the challenges identified in the Sixth National Report. Actually, all those challenges are mentioned in the previous question.