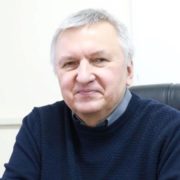 The new safe confinement (NSC) is a structure well known not only in Ukraine but also throughout the world. The entire world community observed its construction and installation in the design position over the Shelter. Twenty-eight countries have been donors investing in a large-scale radiation safety project.

Before NSC construction, its main functions were defined. The first is to protect personnel, the public and the environment from radiation hazard hidden in the ruins of ChNPP-4 under the Shelter. The second is to form favorable conditions for dismantling unstable structures of the Shelter, appropriate management of radioactive waste, and removal of hazardous fuel-containing materials.

The first NSC construction stage started in April 2012. On 29 November 2016, there was a long-awaited sliding of the arch over the Shelter, which was constructed in 1986 over the damaged ChNPP-4.

What is the future of NSC? Will Ukraine be able to dismantle ChNPP-4 fragments? Destination expert, head of SSTC NRS Decommissioning Department Serhii Kondratiev answers to these and other questions of the Uatom.org Editorial Board. – After the accident at ChNPP-4, it was necessary to take urgent measures to protect the environment against release of radioactive substances. In several months, the Shelter was constructed over ChNPP-4.

Nevertheless, the extremely short periods of construction under high radiation levels, use of remote methods, inadequate strength of the survived structures of ChNPP-4, which became the support for Shelter construction, significant amount of radioactive materials and fuel inside identified numerous risks and the need to minimize them.

In 1997, a group of international experts developed a Shelter Implementation Plan. The document provided implementation of both priority measures to stabilize and increase safety level of the facility, as well as long-term measures on Shelter transformation into an environmentally safe system, including NSC construction.

The Shelter Implementation Plan was approved by the Government of Ukraine and the community of countries under the auspices of the G7. In particular, these states, as well as the European Union have allocated funds to implement the measures envisaged by the plan.

Stabilization of structures was gradually implemented from 1998 to 2008, construction of the new safe confinement started in April 2012. On 29 November 2016, there was NSC sliding over the Shelter.

The next stages are NSC commissioning, establishing infrastructure to dismantle unstable structures of the Shelter, appropriate management of radioactive waste, and in the future, removal of hazardous fuel-containing materials.

– Did any problems and challenges arise during NSC construction and sliding?

– In general: no. Specific safety requirements are developed in the design basis and agreed with the nuclear regulator.

Technical requirements of the existing regulatory framework in nuclear energy use are applied as the basis.

Prior to NSC construction, regulations defining safety principles and bases for activities under SIP projects at the Shelter were put into force. (The main SIP purpose is to transform the Shelter into an environmentally safe system. SIP is based on five fundamental goals and includes 22 tasks. Look here for more details – ed.).

SIP projects were licensed due to a regular constructive dialogue between the licensee, contractor and nuclear regulator. This has resulted in the implementation of all SIP projects in compliance with safety requirements. The same refers to NSC arch construction and sliding.

– When NSC is going to be commissioned? In addition, what will happen under NSC after that?

– How reasonable and justified is to dismantle unstable structures under NSC after facility commissioning?

– NSC lifetime is not less than 100 years. Safe state of the Shelter inside NSC should be maintained during this period.

One of the main NSC functions is forming conditions for dismantling unstable structures of the Shelter, appropriate management of radioactive waste, and removal of hazardous fuel-containing materials.

Currently, a minimum number of measures to stabilize the most unreliable structures of the confining structure is implemented at the Shelter.

Within implementing SP-2, pre-design studies have been completed. In order to provide dismantling of Shelter unstable structures, it is necessary to form the infrastructure (SP-2) without delay.

– Are there technologies in Ukraine to dismantle ChNPP-4 under NSC?

– NSC is a unique structure all over the world. Consequently, no such activities have been performed up to this day.

Dismantling unstable structures and handling operations should be performed using the system of main cranes. It is still necessary to develop the technology for removal of fuel-containing materials.

– Has Ukraine conducted studies on behavior of fuel-containing materials and radioactive waste to develop further strategy of their management?

In order to obtain the necessary data for simulation, it is necessary to systematically control behavior of the aggregate of fuel-containing materials for at least several years. Development and implementation of a relevant control program is one of the most important tasks during NSC operation.

– Where radioactive materials will be stored after dismantling of ChNPP-4?

– It will depend on their activity. Dismantled structures will be subject to fragmentation and most likely will be disposed in near-surface disposal facilities.

– How much time it is required to completely dismantle ChNPP-4? How will this area be used after that?

– When developing and implementing long-term measures to transform the Shelter into an environmentally safe system, it is necessary to take into account that design NSC lifetime is one hundred years. At present, advisability of ChNPP-4 complete dismantling is not analyzed. Thus, this issue should be considered.

It is clear that Shelter dismantling to the “greenfield site” is not realistic. Taking into account the contamination level in the exclusion zone around the Chornobyl NPP, it is necessary to determine final state of the Shelter. At the same time, it should be harmonized with the long-term strategy of activities in the contaminated area around ChNPP.

Congratulations on Constitution Day of Ukraine
Scroll to top