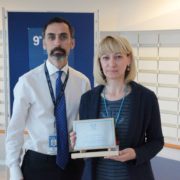 A meeting between representatives of the competent national authorities related to the Convention on Early Notification of a Nuclear Accident and the Convention on Assistance in the Case of a Nuclear Accident or Radiological Emergency took place in Vienna (Austria) on 18-22 June 2017. Deputy Head of SNRIU Department of Emergency Preparedness and Radiation Protection, Nataliya Bizhko, took part in the event from Ukraine. “The purpose of the meeting was to establish more efficient information exchange and improve interaction between the competent authorities of the IAEA member states to improve the national emergency preparedness and response systems and implement two above-mentioned Conventions”, Natalia Bizhko noted.

The fifth separate meeting dedicated to the Response and Assistance Network (RANET) was held on the last day of the event.

This network was established by the IAEA as an operational tool to support practical implementation of the Convention on Assistance in the Case of a Nuclear Accident or Radiological Emergency. RANET is an integrated system for the coordination of international assistance.

If a state needs assistance because of a radiation incident or an emergency, it can send a request to the IAEA. In turn, the IAEA will provide operational assistance through RANET network in form of expert advices related to response, provision of necessary equipment and materials, as well as arrival of qualified personnel to the site.

The states that are parties to the Convention on Assistance in the Case of a Nuclear Accident or Radiological Emergency join the RANET network. Ukraine joined the network in 2016.

Difficulties during RANET performance and ways to overcome them were also discussed during the fifth meeting on June 22. Establishing a successful network is quite important for the world community since it will help in minimizing the consequences of current or potential nuclear and radiation incidents”, Nataliya Bizhko underlined. The State Nuclear Regulatory Inspectorate of Ukraine was granted the IAEA award for the participation in the International Response and Assistance Network RANET.