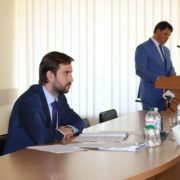 The lifetime of RNPP Unit 3 was extended upon decision of the SNRIU Board.

Chairman of the State Nuclear Regulatory Inspectorate of Ukraine, Hryhorii Plachkov, opened the event. “Like most countries of the European Union, Ukraine is implementing the strategy for justifying the long-term operation of power units. We are here today to take the final decision on RNPP Unit 3 long-term operation”, SNRIU Chairman noted. The design lifetime of RNPP Unit 3 expired on 11 December 2017. According to Ukrainian legislation, the decision to extend the power unit service life is made by the national nuclear regulator based on conclusions of state nuclear and radiation safety review by amending the license for nuclear installation operation.

The SNRIU Board convened on 30 November 2017 and decided that RNPP Unit 3 would be shut down and fuel would be completely unloaded from the reactor core to implement all necessary organizational and technical measures to justify long-term operation of this nuclear installation. Under this event, the floor was given to Rivne Nuclear Power Plant Director General Pavlo Pavlishyn who spoke in detail about the status of activities related to RNPP Unit 3 preparation for long-term operation. After that, Head of Nuclear Installation Strength and Reliability Analysis Unit of the State Scientific and Technical Center for Nuclear and Radiation Safety (SSTC NRS), Oleh Zeleny, presented findings of the regulatory review of the Periodic Safety Review Report (PSRR) for RNPP Unit 3.

“SNRIU experts conducted a comprehensive inspection of RNPP Unit 3 from 4 to 8 June. The commission of the national nuclear regulator established that this power unit had all preconditions for long-term operation. At the same time, SNRIU inspectors noted that the operating organization still had not completed all activities planned for the 2017 annual outage at the time of the inspection”, Valerii Buhay noted. From 11 to 12 July 2018, the SNRIU Commission checked the implementation of activities that had not been completed during the inspection in June. Based on the inspection results, the implementation of the planned measures under the Comprehensive (Integrated) Safety Improvement Program for nuclear power plants was under completion. These measures would be implemented before completion of the 2017 scheduled outage in the scope agreed with the SNRIU. The decisions on lifetime extension for equipment of systems important for safety are being developed and submitted to the national nuclear regulator in accordance with established deadlines.

“Since it is impossible to replace the fast neutron sources (2 units, positions 3TV30Q01 and 3TK30J01), Rivne NPP assessed their technical condition, decided that their lifetime could be extended until the 2019 scheduled outage and agreed the deadline for their replacement with the SNRIU. At the same time, measures to eliminate or compensate inconsistencies with the requirements of nuclear safety standards, rules and regulations are implemented in the scope agreed with the SNRIU”, Valerii Buhay stated. “The results of the regulatory review of the RNPP Unit 3 PSRR and the inspection findings confirm the safety of long-term operation of RNPP Unit 3”, he summed up.

The members of the SNRIU Board voted unanimously for RNPP Unit 3 long-term operation. The power unit lifetime was extended until 11 December 2037.