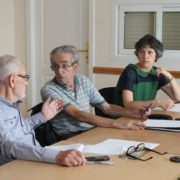 The SNRIU Public Council meeting was held on 13 July 2018. Three issues important to nuclear and radiation safety were considered under this event. Deputy Director of Nuclear Installation Safety Directorate, Oleksandr Hryhorash, told about the impact of the Law of Ukraine “On Environmental Impact Assessment” on SNRIU activities.

Law of Ukraine No. 2059-VIII “On Environmental Impact Assessment” (hereinafter the Law on EIA) was adopted by the Verkhovna Rada of Ukraine on 23 May 2017 and put in force on 19 December 2017.

This Law establishes the need for environmental impact assessment in the implementation of any planned activity (planned economic activities including construction, reconstruction, technical re-equipment, expansion, redevelopment, dismantling of facilities and other interference into the natural environment). The final provisions of this Law amended a number of other laws of Ukraine, among which is the Law of Ukraine “On Nuclear Energy Use and Radiation Safety”. In particular, amendments were made to part 2 of Article 40, which is now worded as follows:

“The state nuclear regulatory authority performs the state nuclear and radiation safety review of nuclear facilities, uranium plants and radioactive waste management facilities and other radiation sources taking into account the environmental impact assessment and other state reviews drawn up in accordance with the legislation”.

The SNRIU can start any state nuclear and radiation safety review in compliance with these amendments only following the environmental impact assessment to determine whether the planned activity affects the environment or not. “At the same time, there is currently no clear understanding of what exactly kind of documents the nuclear regulator should require from the operator. What documents approve the absence of negative impact on the environment? In the end, what is the level of signatories of these documents? This all is currently not clear”, Oleksandr Hryhorash commented.

In addition, the representative of the regulator described the ways for solving the problematic situation that arose after the entry into force of the Law on EIA. After an active discussion, the members of the Public Council decided to support the SNRIU and send letters to the Cabinet of Ministers of Ukraine and the Verkhovna Rada of Ukraine with a proposal to amend these Laws or Resolutions of the Cabinet of Ministers. “The current form of the documents prevents performing the activities of the national nuclear regulator”, the Head of the Public Council Yaroslav Rozhylo summed up. The second issue on the agenda was to discuss Rivne NPP Unit 3 long-term operation. The SNRIU experts reported in detail on the situation in this area and invited members of the Public Council to the SNRIU Board meeting, during which the final decision will be taken on long-term operation of the said power unit. Finally, the Director of Information and Public Relations of the Ukrainian Nuclear Forum Association Olha Kosharna initiated the discussion of issue 3 on the agenda, namely, the staff problems in this branch. The expert reported on the non-competitiveness of salaries in the field of nuclear energy and the significant stream of experts from Ukraine to the UAE, Turkey, Belarus and other countries.

Members of the Public Council decided to submit a letter to the National Commission implementing the state regulation in the energy area and public services and draw attention to the fact that systematic underfinancing of the nuclear industry can lead to the loss of licensed personnel.