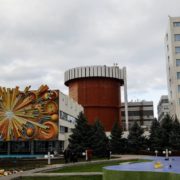 The South Ukraine NPP Unit 3 is the first core of Ukrainian NPPs that has been completely loaded with Westinghouse nuclear fuel.

The Energoatom President Yuri Nedashkovsky noted this during the 32nd meeting of the operational headquarters for Westinghouse fuel implementation at Ukrainian NPPs in the town of Yuzhnoukrainsk.

“Yesterday (18 July – ed.) was the first time when we loaded the South Ukraine NPP Unit 3 core completely with Westinghouse fuel. This will allow us to transfer from fuel pilot operation to commercial operation within one year”, Nedashkovsky stated.

He also added that loading of Westinghouse fuel at Rivne NPP Unit 3 would start in 2021.

South Ukraine NPP Director General Yurii Lisnichenko stated at the meeting that no comments were made on loading the assemblies and power ascension at Unit 3.

He added that complete core loading with Westinghouse fuel was planned at South Ukraine NPP Unit 2 for 2020.

According to the UNIAN Information Agency, the Russian TVEL Company and Energoatom signed, in April 2014, a supplementary agreement to the 2008 contract with Westinghouse Company, which produces fuel at its plant in Sweden, in the framework of nuclear fuel supply diversification for Ukrainian nuclear power plants and decrease of dependence on one supplier.

According to this document, the Westinghouse Company will replace TVEL fuel at 1000 MW power units in case of force-major, including potential limitations of fuel supply from Russia to Ukraine.

At the end of January 2018, Energoatom and Westinghouse extended the contract on fuel supply to 2025. Swedish fuel is currently successfully operated at six power units of the Zaporizhzhya and South Ukraine NPPs.

Radwaste Treatment Plant to Be Put into Commercial Operation at ZNPP in December...
Scroll to top