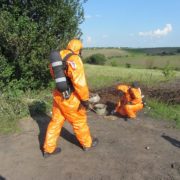 According to the information received by the SNRIU, in early August 2018, UKT-D11 transport container was found near Khmelnytskyi. Inside the container, there was another container of KZ type, whose biological protection was made of depleted uranium. Equivalent dose rate of the KZ container was 16.8 μSv/h on the surface and 0.70 μSv/h at a distance of 1 m. According to Cabinet Resolution “On the Approval of the Procedure for Interaction of the Executive Authorities and Legal Entities Performing Activities in Nuclear Energy Use under Revealing Illicit Trafficking of Radioactive Materials” No. 813 of 02 June 2003, after dosimetric survey, it was decided to send these products to the Energoatom’s Khmelnitsky NPP for temporary storage with their further transport to RWDS Kyiv SISP of the USC Radon. Radioactive contamination of object surface and the environment was not detected.

Atom for Peace Action to Be Held for Bucha Residents

No Radiation Anomalies Revealed in Foodstuff in Bucha
Scroll to top