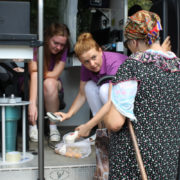 On 6 August 2018, the ‘Atom for Peace’ street campaign took place in the town of Bucha, during which experts of the State Scientific and Technical Center for Nuclear and Radiation Safety (SSTC NRS) checked the content of radionuclides in food, water, and household and consumer items. Representatives of the editorial board of the Uatom.org website on nuclear and radiation safety and non-proliferation were co-organizers of the event. The participants of the event communicated with Bucha residents about responsible attitude to nuclear energy, disseminated information about the danger of orphan radiation sources, and told about exposure to radionuclide radon gas.

“Among other things, Bucha residents brought apples, pears, plums, raspberries, blueberries, and mushrooms to be checked for radionuclide content. Of course, cured pork fat and garlic were also brought for check. According to the measurements, no radiation anomalies were revealed”, commented Yulia Balashevska, head of SSTC NRS radiation technology laboratory. Maria, an old-age pensioner, decided to make sure that radiation background in her garden was ok, so she took this opportunity and brought pears and cherry plums. “In the fruit and vegetable season, my family consumes these products daily, so I decided to find out how safe they are,” the woman said. SSTC NRS experts calmed her: the content of radionuclides in fruits did not exceed the allowed value.

Nina, a staff member of Bucha’s general academic school, brought tomatoes from her own vegetable garden for check. “We and our colleagues were going to have lunch when we found out that your street campaign was near us. We decided to take this opportunity and check tomatoes for the content of radionuclides”, the woman commented. The SSTC NRS experts performed the necessary measurements and concluded that the tomatoes were ok and could not do any harm to health. According to Kateryna Stavnichuk, editor of the Uatom.org website, one of the most important tasks of the ‘Atom for Peace’ street campaign was to raise Bucha residents’ awareness of nuclear and radiation safety issues. “Besides a series of radiological surveys, we communicated with people about the dangers of radiation, including radionuclide radon gas, explained how to protect themselves from threats, and distributed information and education booklets in this area to everybody interested. We also asked their opinion about violation of the Budapest memorandum, whose signatories (United States, Great Britain, and Russia) promised Ukraine to provide international security guarantees in exchange for adopting the nuclear-free status. Given today’s realities, the overwhelming majority of respondents are convinced that Ukraine should continue to defend its rights in the framework of the said document more actively”, Kateryna Stavnichuk noted. Attempt to take out 100 kg of radioactive contaminated scrap metal from the...
Scroll to top