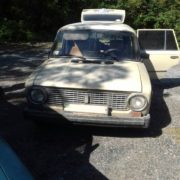 Just recently, the border guards jointly with the National Police officers detained two Ukrainian citizens who tried to take out about a hundred kilos of radioactive contaminated scrap from the Chornobyl Exclusion Zone. This was reported by the press-service of the State Border Guard Service of Ukraine. The offenders were two residents of the Korosten city (Zhytomyr region). They transported radioactive scrap they by a “VAZ” car. The men collected the metal in abandoned buildings of the Chornobyl Exclusion Zone, and dug it from the ground. Police officers made an administrative record on “metal hunters” for violating the radiation safety requirements on the territory exposed to radioactive contamination. Currently administrative proceedings are ongoing.

No Radiation Anomalies Revealed in Foodstuff in Bucha

Ukraine and the IAEA are looking for effective ways to manage high-level wa...
Scroll to top