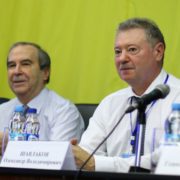 On 04-06 September 2018, the VI International Scientific and Practical Conference “Safety and Efficiency of Nuclear Energy” was held in Odesa. The event was devoted to the 100th anniversary of Odesa National Polytechnic University (ONPU) establishment. The event was organized by the Energoatom Company and ONPU in association with the National Academy of Sciences of Ukraine (NASU).

Uatom.org editorial board communicated with conference participants on the extraordinary role of nuclear energy reliability and efficiency and the importance of such conferences in Ukraine. According to Oleksandr Shavlackov, First Vice President – Technical Director of the Energoatom Company, reliability and efficiency of nuclear energy is the safety basis in Ukraine. “Over the past few years, we have experienced rather serious situations: crisis, emergencies in the nuclear industry, and such an unpleasant phenomenon as rolling blackout. However, I can proudly say that the operating organization is well aware of its role, functions and tasks supplying about sixty percent of the entire electricity generation to the market”, Oleksandr Shavlackov assured. Pavlo Pavlyshyn, Rivne NPP Director General, spoke about a number of safety improvement activities completed at RNPP. “This year RNPP-3 was approved for long-term operation for twenty years. If we did not invest in the industry, in safety improvement, if we did not carry out calculations jointly with the Energoatom, our colleagues, including universities and NASU, it would hardly be possible to achieve a positive result. Joint activities resulted in a plenty of new ideas, new technologies, which we are, in fact, ready to share with the conference participants today”, Rivne NPP Head stated. “Many national and international experts in the area, representatives of the top management participated in this year’s conference. Most of the reports were devoted to existing problems in the industry and the further ways of their solution”, Volodymyr Kravchenko commented. “It was also important that the participants and guests of the conference had the opportunity to chat outside the main room, make useful contacts, share experience”. Khaled Naffaa, Senior Engineer in the Odesa Office of the Energoatom Company

“This year’s conference was carried out in my native Odesa Polytechnic Institute. This was its name when I got here in 1987. I defended my thesis here and became a scientist”, Khaled Naffaa shared. According to his words, expectations about the conference “Safety and Efficiency of Nuclear Energy” were fully justified, as the expert managed not only to receive new useful information, but also get acquainted with national and international researchers in the area. “After all reports and presentations made during three days of the conference, I came to the conclusion that science in Ukraine is developing despite not always favorable economic conditions. I really love Ukraine, I am in favor of it and I sincerely wish that it was a leading country”, the expert concluded.

Implementation of E-Tickets for Visitors Started in the Exclusion Zone