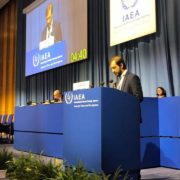 On 17 September 2018, the 62nd General Conference of the International Atomic Energy Agency (IAEA) started in Vienna (Republic of Austria). During the week, authorized delegations from IAEA member states will discuss the most important issues of the organization’s activities, including approval of the Agency’s budget for 2019 and definition of nuclear and radiation safety priorities.

At the General Conference, Ukraine is represented by the official delegation headed by Chairman of the State Nuclear Regulatory Inspectorate (SNRIU) Hryhorii Plachkov. The delegation also includes representatives of the Verkhovna Rada of Ukraine, Presidential Administration of Ukraine, Ministry of Energy and Coal Industry, State Agency on Exclusion Zone Management, Energoatom, and State Scientific and Technical Center for Nuclear and Radiation Safety. “Ukraine highly appreciates IAEA work and the most significant achievements during 2018 in the area of non-proliferation of nuclear weapons, nuclear and radiation safety”, SNRIU Chairman Hryhorii Plachkov said. According to him, Ukraine actively supports the Agency in its programs and initiatives. Technical cooperation projects, which promote implementing the measures on ChNPP decommissioning and radioactive waste management, are particularly important for Ukraine.

An international exhibition in which the State Agency of Ukraine on Exclusion Zone Management presented an exclusive exposition stand “Chornobyl: Territory of Changes” was also initiated within the IAEA General Conference. The exhibition presents the Ukraine’s achievements in mitigating Chernobyl accident consequences, Chernobyl NPP decommissioning and transforming the Shelter into an environmentally safe system. Particular attention was paid to the large-scale program for exclusion zone remediation.

The Ukrainian stand was attended by invited delegations from IAEA member states, staff of the Agency Secretariat and other guests of the exhibition. Acting IAEA Director General Ms. Mary Alice Hayward noted that it is very important to inform the public on such tragedies and their consequences as Chornobyl and Fukushima to prevent them in the future. “Today, nuclear energy is an important component of the national economy of Ukraine. During the last year a number of important decisions on industry development were taken, including long-term operation of three units of national nuclear power plants, start of constructing a centralized spent fuel storage facility in the exclusion zone, full load of the SUNPP-3 core with nuclear fuel produced by the American Westinghouse Company”, SNRIU Head says. “Taking all this into account, I will emphasize that nuclear and radiation safety issues are and will always be a priority for Ukraine, because not only prosperity of our state, but also the welfare of the nation, as well as the cloudless future of our children, depends on it”.

KPI Announced Admission of Students for Physical Protection, Accounting and...
Scroll to top