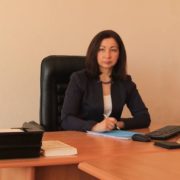 The use of radiation sources for human imaging for non-medical purposes is an additional exposure to human body that requires special justification in each individual case. The imaging in airports and customs is carried out without a doctor’s prescription and does not bring benefits to human health.

On the other hand, such an imaging is a need, because it contributes to the increase of the safety of society: prevents the carriage of prohibited items and substances, minimizes the likelihood of terrorist attacks.

Ruslana Tripailo, Deputy Chairman of the State Nuclear Regulatory Inspectorate of Ukraine, spoke on the following issues: “How to avoid unjustified exposure? Are there protective measures envisaged in European countries? What is the position of IAEA and national nuclear regulatory authority?” The studies conducted by the World Health Organization, as well as the studies carried out in the IAEA member states, confirm the probability for risks of negative effect on human health from non-medical imaging.

“How is it explained? First, exposure of people, including children, pregnant women in airports and customs checkpoints can be carried out without warnings and explanations about possible harm to the health of a particular person”, Ruslana Tripailo said.

“According to international data, effective exposure dose in case of using low-energy x-rays (backscatters) varies from 0.02 µSv to 0.1 µSv per one scanning. In case of using transmission inspection x-rays the value varies from 2 µSv to 5 µSv. Both methods are used to detect explosives and drugs under human clothes. Applying of computer tomography leads to exposure level over 10 mSv per scanning. The computer tomography allows scanning of human body to identify drugs and other prohibited materials, the removal of which is impossible without surgical intervention”, Deputy Chairman continued.

Recently, radiation sources have been used more often in countries for human imaging in the places of mass gathering: shopping centers, banks, sport stadiums, buildings of strategic importance, checking points in airports. X-ray scanning systems in Australia and Jordan are used even in schools and higher educational institutions. In EU countries, such systems are actively being implemented in immigration and penitentiary services.

“One should not forget about risks of scanning cargo at customs. Use of mobile and stationary radionuclide facilities, as well as linear accelerators for cargo scanning can cause and sometimes lead to additional exposure to human in many countries. First of all, this means truck drivers, engine drivers, illegal immigrants who cross the border in trucks or cars, and customs officers at checkpoints”, Ruslana Tripailo explained.

Considering this, many countries support the initiative of the IAEA and EU to establish unified international recommendations on radiation protection, ethical aspects of using non-medical imaging. There is a need to implement international dose limits for the public, personnel of organizations and other persons, who may be subject to such exposure.

There is a need to change the regulatory framework in this area, including accounting and control of exposure doses, implementation of optimization principles and diagnostic protocols (for example, in case of computer tomography).

According to a new IAEA standard “Radiation Protection and Safety of Radiation Sources: International Basic Safety Standards. General Safety Requirements. Part 3” – human imaging using radiation sources for the detection of concealed objects (for smuggling or use for malicious purposes) shall normally be deemed to be not justified. When the government or regulatory authorities decide that the justification of such human imaging is to be considered (benefit to the society is higher than harm to a certain person under exposure), such activities shall be obligatory subject to regulatory control through the licensing and oversight.

This issue is also addressed in Article 22 of Council Directive 2013/59/Euratom dated 5 December 2013. The document establishes the main safety regulations for protection against hazards caused by radiation. Annex V of the article indicates the list of such practices, where it is possible to use radiation for non-medical human imaging. It also specifies requirements for the regulation of this sphere.

Currently, it is planned to use several such installations in airports as auxiliary surveillance equipment (in case of a suspicion of drugs or explosives). This equipment will not be used for mass inspection.

“Taking into account international experience, the SNRIU considers that each such practice shall be justified. The benefit of using imaging shall be higher that harm to health of a certain person subject to exposure. We developed a draft regulatory document that sets requirements for safety justification of using such facilities. Soon, the document will be issued for the public and professional discussion according to the procedure established by the law”, Ruslana Tripailo concluded.

Swedish Experience in Implementing Requirements for Physical Protection of High-Level...