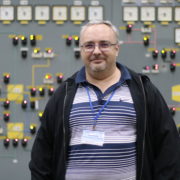 Since February 2014, Ukraine was drawn into an active open phase of a hybrid war by Russia. The aggressor has not only annexed the Autonomous Republic of Crimea, but still provokes and participates in the armed conflict in the Luhansk and Donetsk regions

It is impossible to stay away from these events, especially if they are related to the issue of security of radiation-hazardous materials.

Oleksandr Farrakhov, representative of the Institute of Environmental Geochemistry of the National Academy of Sciences of Ukraine described what physical protection requirements should be met in a hybrid war during the XV Ukrainian Conference on Physical Protection, Accounting and Control of Nuclear Materials. Oleksandr Farrakhov, representative of the Institute of Environmental Geochemistry of the National Academy of Sciences of Ukraine

Hybrid war is a series of different modes of warfare, including the use of regular or irregular military formations, terrorist attacks, information and cyber war. All these actions, as a rule are hidden and implemented through other organizations in order to deprive the state of actual sovereignty without seizure of its territory.

According to Mr. Farrakhov, all hybrid wars have common features. They include the use of the media by the aggressor country to escalate social stress in the state and put pressure on the international community, which results in an information war; application of cybernetic attacks to destabilize and deactivate critical information systems; bribery and recruitment of political and public figures to spread propaganda, weaken the state’s defense capability, generation of religious differences and conflicts; use of churches (in Ukraine, temples of the Moscow Patriarchate) as places to store weapons and as shelters for rebels; invasion of diversionary groups to the territory of the state, etc.

Unmanned aircraft systems are now widely used for hybrid warfare. They are popular because their use does not require special technical knowledge. Among other advantages: simplicity and relative cheapness of maintenance. At the same time, unmanned aircraft systems may be a serious threat to facilities requiring physical protection.

“Within improving engineering features of the physical protection systems, it is necessary to widely use the latest technologies to counteract criminal intentions of both external and internal offenders and also to prevent conspiracy between them. Thus, we consider it is reasonable to use unmanned aircraft systems for the facilities requiring physical protection”, representative of the Institute of Environmental Geochemistry says.

Taking into account actual hazards and challenges coming from Russia in the last four years of the hybrid war active phase, physical protection requirements should be revised regarding planned and unplanned threats and the regulatory framework should be significantly improved.

Use of Radiation Sources in Airports and Customs for Human Imaging: How Safe...