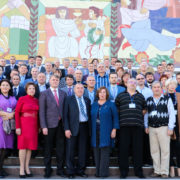 In general, more than fifty participants from twenty-eight institutions of Ukraine, Sweden, Norway and the United States of America participated in this event. The conference addressed the issues related to staffing of nuclear facilities, personnel reliability and counteraction to cyber threats. Transport of radioactive materials, physical protection of radiation sources and other issues were also discussed.

Representatives of the National Guard of Ukraine, National Police of Ukraine and State Border Service covered the issues on the preparedness of physical protection personnel and staff of security units to act in emergency and crisis situations. At the same time, the role of the law enforcement agencies in revealing and preventing acts of nuclear terrorism were discussed.

Representatives from Sweden, Norway and the United States focused on the experience of the international partnership in strengthening the physical protection system of nuclear facilities and materials.

“Norway made a political decision to support Ukraine in physical protection. This is very important today”, representative of the Norwegian Radiation Protection Authority (NRPA) Håkan Mattsson underlined. “Norway has abandoned nuclear energy. However, we started to pay more attention to nuclear security after the terrorist attacks in 2011”.

Many round tables were held under the conference during the week where the current state of the national legislation in the field, the implementation of IAEA safeguards, etc., was discussed among other things.

Traditionally, the conference ended with the discussion and adoption of the Conference Decision that determined the results and outlined plans for the next year. The Conference Decision and collection of documents will be published on the website of George Kuzmich Training Center for Physical Protection, Accounting and Control of Nuclear Materials. “We usually do not hold such events in the format of conferences in Sweden. However, we regularly arrange working meetings between the agencies to improve the regulatory framework and strengthen the physical protection system of nuclear materials”, representative of the Swedish Radiation Safety Authority (SSM) Zlatan Delalic stated. “Supporting Ukraine in the arrangement of this conference is a part of the Swedish program of nuclear safety and physical protection in the partner countries. Reducing nuclear threat in the world is very important for us, so we help Ukraine to solve challenges in this area including harmonization of the regulatory framework in accordance with EU legislation”.