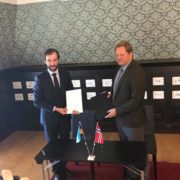 SNRIU Head Hryhorii Plachkov takes part in the coordination meeting to discuss the implementation of bilateral cooperation projects between SNRIU and the Norwegian Radiation Protection Agency (NRPA) in nuclear and radiation safety in Oslo (Kingdom of Norway) of 22-25 October 2018. Ukrainian-Norwegian Cooperation in Nuclear and Radiation Safety lasts since 2014 and envisages joint projects for developing and implementing the top-level regulations on radioactive waste management, radiation protection in medicine and regulatory control over uranium mining and treatment plants. Mr. Plachkov, the Head of the State Nuclear Regulatory Inspectorate and

Per Strand, representative of the Norwegian Radiation Protection Agency on Cooperation in Nuclear and Radiation Safety

The head of the Ukrainian delegation Mr. Plachkov signed the “Minutes on Amending the Agreement between the State Nuclear Regulatory Inspectorate and the Norwegian Radiation Protection Agency on Cooperation in Nuclear and Radiation Safety” on 23 October 2018. According to this Agreement, all parties exchange technical information and cooperate in the sphere of nuclear and radiation safety and security in compliance with the valid legislation of these countries. This document will further enable fruitful cooperation between the two countries in the field of nuclear and radiation safety.