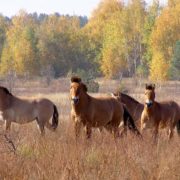 During a regular Ukrainian-Polish expedition to monitor the Przewalski’s horse population, scientists came to the conclusion that natural conditions of the Exclusion zone are very comfortable for this species. According to specialists from the Chornobyl radiation and ecological biosphere reserve, the Przewalski’s horse is an unusual species for the Ukrainian Polissya. The fact that these horses became accustomed to the conditions of the Exclusion zone is of interest to scientists, especially considering radiation contamination of the territory.

«The Chornobyl Reserve is a unique place with unusual and rare inhabitants. This is an interesting target of scientific research, therefore, the agency, for its part, actively promotes the activities of scientists on this territory», – emphasized Vitaly Petruk, the Head of the State Agency of Ukraine on Exclusion zone management. A group of scientists consisting of experts of the Chornobyl radiation and ecological biosphere reserve, the Askaniya-Nova biosphere reserve, and Schmalhausen Institute of Zoology and the University of Warsaw have been exploring the Chornobyl population of Przewalski’s horses for many years and have concluded that the species is not going to leave the territory of the Exclusion zone. Przewalski’s horse is the last kind of wild horses on the planet Earth. In natural environment it was exterminated by a man in the ХХ century, included in the International Red Book with a status «on the verge of extinction».

This species was introduced in the Exclusion zone in 1998 from the Askaniya-Nova Biosphere Reserve. It was the only free population of Przewalski’s horses which at that time consisted of 20 individuals. As of today, according to scientists, this number has grown to at least 110 individuals.

Our favorite Przewalski’s horses on the background of autumn landscapes of the Reserve.

State Agency of Ukraine for the Exclusion Zone Management

The Chornobyl Reserve and the University of Fukushima begin joint research