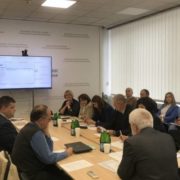 “Ukrainian terminology in radioactive waste management was legally established mostly in the 1990s and is currently not in line with international standards. We appealed for assistance to IAEA experts to jointly remove all gaps and inconsistencies in national legislation and establish a transparent and reliable system for safe radioactive waste management in Ukraine”, First Deputy Head of the State Agency of Ukraine on Exclusion Zone Management (SEZA) Oleh Nasvit said.

The working group consisting of experts from IAEA, SEZA, Energoatom, ChNPP and Radon enterprises studied in detail the main documents determining radioactive waste management process at the legislative level. Upon the results, they identified a number of urgent issues that require an early correction in view of the prospect of a large radwaste amount resulting from NPP units decommissioning and dismantling of ChNPP 1-3 equipment. According to experts, timely improvement of Ukrainian legislation will help to avoid delays during these large-scale activities.

The basis for the development of expert recommendations is IAEA Safety Guide (GSR Part 3), IAEA Glossary 2016, and other IAEA documents (GSR Part 5, GSR Part 6 and SSR-5), which are universally recognized international examples of terminology in radioactive waste management.

According to Oleh Nasvit, IAEA recommendations will give grounds to the Agency to initiate necessary changes in the terminology of Ukrainian legislation in this area. Meeting of the Public Council under SNRIU Held
Scroll to top