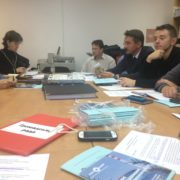 On 14 November 2018, a meeting of the Public Council under SNRIU was held. According to the agenda, issues related to the status of the State Nuclear Regulatory Inspectorate of Ukraine as an independent regulator; status of implementing measures on NPP unit maintenance/long-term operation and implementing C(I)SIP, in particular measures on ZNPP-4 long-term operation were considered. SNRIU representatives provided Public Council members with the data on the status of implementing these measures; strategies for nuclear energy development, namely safety issues of KhNPP-3, 4 structures. SNRIU Chairman Hryhorii Plachkov answered all the questions posed by Public Council members and noted that each comment and proposal will be taken into account in further activities. He also stressed that the SNRIU as a central executive authority, which ensures forming and implements the state safety policy in nuclear energy use, makes regulatory decisions within current legislation of Ukraine. IAEA to Develop Recommendations for Ukraine to Improve Terminology of Ukrainian...