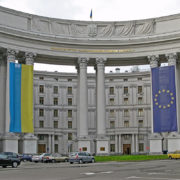 Ukraine called the signatories of the Budapest Memorandum for urgent consultations.

In December 1994, Ukraine gave up its nuclear weapons in exchange for the security assurances confirmed by the United Kingdom, the United States of America and the Russian Federation in the Budapest Memorandum on Security Assurances in connection with Ukraine’s accession to the Treaty on the Non-Proliferation of Nuclear Weapons.

The signatories confirmed the obligation to refrain from the use of force against the territorial integrity and political independence of Ukraine. However, in view of the aggression of the Russian Federation against Ukraine that has been lasting since 2014 and in view of the open armed attack on the Naval Forces of Ukraine in the Black Sea and the Kerch Strait in this November, Ukraine called the guarantors for urgent consultations to ensure full compliance with the commitments and immediate termination of Russian Federation aggression against Ukraine

“Ukraine remains consistent in considering the Budapest Memorandum as an important international instrument to ensure Ukraine’s security, and demands from Russia to fully comply with the undertaken commitments. Only efficient steps are required to restore confidence in the Budapest Memorandum and the efforts by the international community to strengthen the international non-proliferation regime”, says the official statement of the Ministry of Foreign Affairs of Ukraine.

Young Medical Physicists Received “List of Protocols and Recommendations for...

Is Radiotherapy Hazardous?
Scroll to top